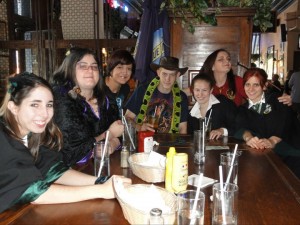 Professor Snape, Bellatrix Lestrange and Hermione Granger will stroll on the same side of Michigan Avenue Thursday night. Expect wizard robes, wands, maybe even a Voldemort mask scattered in the “hordes of wizards” marching to the IMAX theater at Navy Pier for the midnight viewing of the series’ penultimate cinematic installment.

“We wanted to see how many people we could actually get,” says Lori Mages, the march’s organizer and founder of the Chicago Harry Potter Fans Facebook group. “We were afraid we wouldn’t even get twenty.”

At least 120 people have marked “attending” on the event’s Facebook page (Wizards March to Deathly Hallows Part 1), with a potential addition of another seventy maybes. “We have people coming from all over the country: Alabama, North Carolina, Michigan, Indiana,” says Mages.

Mages and her cohorts, Ashley Makarowski and Annette Willman, started the fan page last summer after they met at a Harry Potter conference, where enthusiasts listen to Wrock music, view Potter plays, hear wizard research and attend Hogwarts formals. They will be busy at another conference for the final release in July 2011.

The organizers emphasize that participants can jump in at any point of the march: outside Channel 7 News on State at 5:45pm, at the nearby Potbelly from 6:30pm to 7:30pm, or at “the Bean” at 8pm. The horde will linger in Millennium Park until 8:30pm before they head south to Navy Pier. The group pre-purchased and sold sixty tickets to the midnight IMAX show, but many marchers will drop off to see the film at AMC River East or elsewhere.

Arrive as a Muggle in human garb if you want, but Mages and Makarowski say, “most big fans do dress up.” (Kristine Sherred)