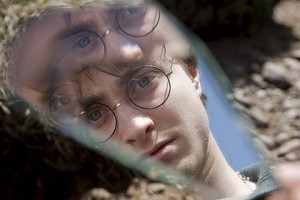 If you’ve never seen one of the Harry Potter films, the latest and next to last is no reason to start. “Harry Potter and the Deathly Hallows, Part 1” is the seventh; the eighth will be Part 2. Much technical craft is evident throughout this tale of three friends armed with wands and potions. They undertake a tiresome chain of quests to decode clues, uncover magic items and destroy malevolent entities. Screenwriter Steve Kloves and director David Yates may be faithful to the source novel by J.K. Rowling, but they do no favors to fans of screen narrative. Plot points arise with out-of-the-blue asides like ‘Oh, you didn’t know that so-and-so had a brother?’ One producer readily admits it’s “all about resolution—the dotting of all the i’s and the crossing of all the t’s.” This is just one inconsequential chase after another by “the chosen one” Harry (Daniel Radcliffe), his pal Ron (Rupert Grint) and their pal Hermione (Emma Watson). They are alumni of the School of Witchcraft and Wizardry, which is not seen this time. The only architectural interior of note is the under-imagined Ministry of Magic where “Magic is Might” is chiseled in stone and dark-garbed evildoers are ensconced. This thinly Orwellian bureaucracy has a whiff of fascism. Its registry of ancestry for mixed-bloods and half-breeds deems them an “abomination.” Never explained is why the bad magic faction is decimating the population at large. The death toll is broadcast over the radio since there’s no internet or television in this world. Most of the story is set in wintry, windswept locations far from cities. Isolating the trio, though, adds little focus to their uninteresting rivalries. My favorite character in the sixth film was the lovely weirdo Luna (Evanna Lynch), who only gets one good line in the seventh. With Helena Bonham Carter, Robbie Coltrane, Tom Felton, Ralph Fiennes, Michael Gambon, Brendan Gleeson, Richard Griffiths, John Hurt, Jason Isaacs, Bill Nighy, Alan Rickman, Fiona Shaw, Timothy Spall, Imelda Staunton, David Thewlis, Julie Walters, Bonnie Wright. 146m. (Bill Stamets)