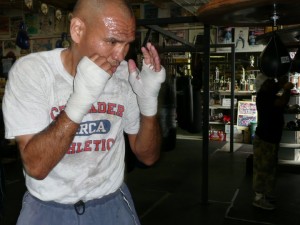 While Frederick Wiseman’s films have a reputation for extended running times, encouraged by a period when finance largely came from PBS, recent movies, such as last year’s “La Danse” (in a return run at Siskel this week) and “Boxing Gym,” manage their observational heft at more compact duration. Obstinacy is everything with the nearly-81-year-old documentary-maker. In a late-blooming career spanning almost forty features, the patient, exacting filmmaker has found his own way of observing the world: with extended takes in cinema vérité fashion, recording his own sound, watching a process unfold and then returning to his edit warren with miles of film, within which a movie is waiting to be found. Fellow filmmaker Errol Morris recently told the Boston Globe that he thinks it’s wrong to consider Wiseman a documentarian, but rather, “as one of the most important living film directors, period.” His observation of “the sweet sport” may be one of his most engaging in ages, immersed in the dance of repetitions of the members of a slightly seedy Austin, Texas boxing gym. Process, slow and simple. Men and women, young and old: Wiseman goes with their punches. “Documentaries, like theatre pieces, novels or poems are forms of fiction,” Wiseman has written, which, without the evidence of his lovingly shaped, eminently constructed films, would sound like vainglory. The meditative results of “Boxing Gym” are true fiction. 91m. (Ray Pride)

“Boxing Gym” opens Friday at Siskel and runs until November 28.