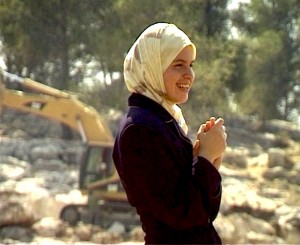 Provocative in the best possible way, Julia Bacha’s compelling “Budrus” documents a year in the life of a village of 1,500 on the West Bank in the Palestinian Territories, where the citizens attempt nonviolent resistance to the “Separation Barrier” being erected between Israelis and Palestinians. Bacha talks to Israelis as well, weighing the issues of property, safety, heritage, politics. The subject is complex. Bacha does not simplify. Some of the footage of Israeli soldiers, female and male, under fire in the streets, captures confusion, but it is the clear-headed portrayal of the rerouting of the barrier away from the village, preserving access to surrounding lands, including 3,000 ancient olive trees, that is at the heart of “Budrus.” The hope for results from peaceful protest, and for simple understanding, radiates from the story, and especially from the personalities that unfold. Bacha co-wrote and edited “Control Room,” and that film’s director, Jehane Noujaim, is a producer here. 81m. (Ray Pride)

“Budrus” opens Friday at Facets. A trailer is below.