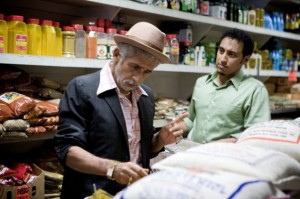 Oh, to be merely agreeable, with the hope of intermittent savor. “Today’s Special” is the kind of small production, with perky music, pushy montages and “cheeky” typefaces that almost drives you from the theater in its first minutes; it’s like wanting to leave a restaurant after one look in the door. The dialogue can be atrocious: “Fillet like the wind, Freddie!” But, once the plotline kicks in, of second-generation Indian-American chef Samir (Aasif Mandvi) being forced into saving the family tandoori restaurant, there are tasty moments, largely from its Queens setting and its glimpses of the Indian community there. Expect a brightly colored masala of broad comedy and broader sentiment, if not the “garam masala” mix that figures into the plot. Based on Mandvi’s play, “Sakina’s Restaurant.” With Kevin Corrigan, Dean Winters, Jess Weixler, Ajay Naidu, Kevin Breznahan, Naseeruddin Shah, Kumar Pallana and Madhur Jaffrey, known for her strong presence in film and food, who offers little here. 99m. (Ray Pride)