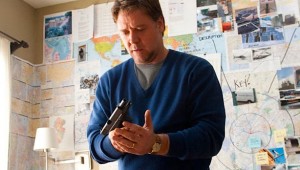 Three years, three months and three days are the successive time frames–marked on screen–that telescope the suspenseful timeline as John (Russell Crowe) breaks his wife Lara (Elizabeth Banks) out of Allegheny County Jail before her transfer to prison. This Pittsburgh community college teacher, raising their little boy by himself, does not believe Lara bludgeoned her boss to death with a fire extinguisher in her office’s parking structure, but there was enough evidence for a twenty-year sentence. Unike Crowe’s character in “Proof of Life” (2000), an ex-military contractor rescuing execs kidnapped by rebels, John is a middle-class everyman devoted only to his spouse. He faces a steep learning curve to acquire a new set of extra-legal skills. “Show me where the bullets go,” he tells the proprietor at the gun shop. Paul Haggis writes and directs this pro-family entertainment with no agenda about criminal injustice like “Conviction,” a recent get-out-of-jail saga based on genetics and court rulings, not guns and ruses. “Based on the film ‘Pour Elle'” acknowledges an easily missed end credit. “The Next Three Days” follows its 2008 French source with extreme fidelity. Dialogue is identical in places, except for local tweaks, like a Volvo turning into a Prius. Brian Dennehy, cast as John’s retired father, even looks like his French counterpart. Besides the same sequences, many shots are framed alike, down to the use of rack focus. What Haggis adds to the original is twenty-six minutes of operational detail that improves the plot without padding. Setbacks, deadends and close-calls impart pulses of tension. The third-day finale is an extended suite of action scenes. Earlier, John lectures to his lit students on Cervantes: might an “insane” quest free one from “a life of despair”? The family that skips the country with the best passports you can buy by robbing meth cookers, is the family that stays together. With Lennie James, Olivia Wilde, Ty Simpkins, Helen Carey, Daniel Stern, Kevin Corrigan, Liam Neeson, RZA. 122m. (Bill Stamets)