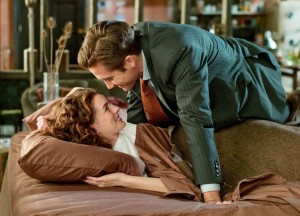 Whenever Edward Zwick would make a period epic like “Last Samurai,” I’d wonder what ideal film he might make that would instead embrace the youthful sexual misprisions of “About Last Night…,” the urban neurosis of “thirtysomething,” the tremors of teenage in “My So-Called Life.”

Maybe I was wondering how the best attributes of his work in television and film might have worked out if he were older, had been in the middle of his career in the 1970s. With “Love and Other Drugs,” Zwick mixes drama, comedy and more than a little low humor in an adaptation of Jamie Reidy’s 2005 memoir, “Hard Sell: The Evolution of a Viagra Salesman.” Its core is a relationship between the up-and-coming Pfizer pill pusher, Jamie (Jake Gyllenhaal) and Maggie (Anne Hathaway), a 26-year-old with a diagnosis of early-onset Parkinson’s disease. (This is revealed quickly and adroitly in the movie.) There’s a casual character to the way the pair speak and behave around each other, largely played out in her dirty, dusty, downtrodden loft that elevates the movie to something greater than the sum of its parts. While shot in Chicago, the location is meant, Zwick says, to still embody “the dream of Chicago” spread across the Midwest.

I had to come right out and ask, what niche this thing is in, where had the writer-director-producer and the studio slotted this romdramacom-what-the-hell? He laughs, then quickly observes, “The problem with any kind of movie these days, when it’s reduced to thirty-second television spots, is that it is diminished into being genre. I would say that there’s a certain way in which this movie defies that. I hope that’s not to its peril! It is funny. And it’s sexy. It certainly has serious aspects to it. I mean, my whole intent was that it would be like life. That even the most serious things are funny. But I’m sure that they will sell it, above all else, as a love story. And that those aspects of it that are satirical or political or serious will be just ambient. I don’t think that’s wrong, necessarily, I just hope that it doesn’t preclude a more adult audience, because it plays the same to older people as it does to younger people. I think older people look at that moment in life when you’re utterly smitten and passionate in a particular way. And the idea of finding a person who will be there in a moment of need. And the younger people, I think, look at it in some way aspirationally! “This is what my life might be; I long for this.”

After the screening, I had texted a younger female friend about the film’s admirable frankness and she was adamant, “No, no, I don’t do romantic comedy, I’m a guy that way.” She would only concede, “Well, I do love me some Anne Hathaway.” Zwick smiles. “You see, maybe at the end of the day, Annie has accumulated a lot of good will by virtue of her performances, and also doing Shakespeare in the Park. You know, she’s ambitious. Artistically ambitious. And has delivered. And the meta of wanting to see these two people together will add to its allure.”

Jamie doesn’t really have that— “Go ahead,” Zwick says, laughing. He doesn’t have the “redemption” moment. The redemption he has is their love, they still like each other, even though he’s a jerk, he’s an asshole still. You don’t force him through redemption, the redemption is merely, can I be good for you. “Yeahhh. I dunno, we wanted to cleave as truthfully to that aspect of what happens. But I think that also a very telling aspect of Jake’s performance is that it’s not sentimentalized. And he holds onto those aspects.” In a sense, what he goes through in the story is transformative rather than transforming. His characteristics that are abrasive, they transform into something useful. “Look, the thing about romantic comedy is that it, as a genre, is in disrepair. People think that if you just adhere to the obligatories of plot, that therefore you’re making a romantic comedy. But to think about movies like ‘Shampoo,’ to think about some of the Billy Wilder comedies, or even earlier, ‘Philadelphia Story’ and ‘Pat and Mike.’ These were sophisticated people. There was a squirmier, edgier quality of what made a romantic comedy. I actually saw very recently I saw Preston Sturges’ ‘Palm Beach Story.’ Fantastic! Its morality is really squirmy and questionable and very grown up. And that’s what the genre should be.”

“Bravery” is too often the easy word for an actor doing a raw, exposed, tear-creased performance, and it would be a misused word for Hathaway’s work. “Yeah. I would say it’s a profound relaxation. I would say that it’s this ability to be committed and immersed in a way that is unquestioning. There’s a default, the default state is truth. And so that everything is in its service. It’s not a question of bravery, really, there is no option.”