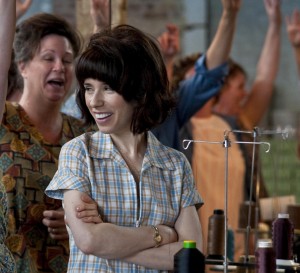 “Made in Dagenham” is a political movie, but it’s also a pointed, polished entertainment.

Modestly scaled like most British movies, Nigel Cole’s film opens with a feat of costume design, of women arriving in 1968 at an English Ford factory on bicycles, a panoply of elegant drab, of commonplace fabric and pattern, fanning out in vital profusion. One hundred-eighty-seven women sewing car-seat upholstery in a decrepit 1920s shop alongside plants where 55,000 men work. Desmond Dekker’s “You Can Get It If You Really Want” plays, and the lyrics soon take on a literal meaning. Equal pay for women! They put the finishing touches on Ford cars, what “mad men” of the era would have written ads for, as period footage in the montage attests. Superimposed over the sequence is a pile-on of the production credits: “BBC Films presents/UK Film Council presents/In association with HanWay Films, BMS Finance and Lip Sync Productions/A Stephen Woolley/Elizabeth Karlsen/Number 9 Films production/In association with Audley Films.”

Yikes. Is that what it takes to get an intelligent yet clever English language movie made in the modern economy? As many as ten sources of finance? On top of that, what are the best commercial hopes for “Made in Dagenham” (slurred as “dagen’em”)? U. S. distributor Sony Pictures Classics getting awards notice, whisking it along the red carpet onto the stage of the Kodak Theatre at the end of February?

Such a heartening picture makes me feel disheartened anew about what it takes to get audiences into the theater for a smaller film that’s simply bright, direct and engaging. C’mon, it’s “Norma Rae” meets “The Full Monty”! As directed by Cole (“Calendar Girls,” “Saving Grace”), notes are struck with economy and pleasure. Actually, it’s what cable networks have been doing so very well for years: taking on a timeless, topical subject like equal rights and equal pay and finding a format to explore it in. Grown-ups do go to the theater, recent studies show. If there’s a story. If there’s a subject. Even if it’s a movie about the working class—and the impoverished clan of “Winter’s Bone” has shown a small but demonstrable appetite for class-aware movies this year—”Made in Dagenham” is about transformation, uplift, success… It’s a handy parable built on history.

Enter: Sally Hawkins. She stands out in smaller roles, like in “All Or Nothing” or “Cassandra’s Dream,” but here and in “Happy-Go-Lucky,” this small, toothy, certainly not plain but not traditionally beautiful woman is nothing less than radiant. What does she radiate? Compassion. Curiosity. Goodness, even. That’s just who-what she is. (Um, a movie star.) There are moments in Mike Leigh’s film where her character, Poppy, remains ebullient, constructive, helpful, hopeful, in such a sturdy way that the heart races. And her Rita O’Grady, an upbeat rabble-rouser, has that here, too, even among actors like Bob Hoskins, Miranda Richardson, Rosamund Pike, Jaime Winstone and Rupert Graves.

Part of the delight of the filmmaking is its understated visual style. Where some filmmakers would make class assumptions on the basis of how to portray women’s 1968 fashions and hairstyles, Cole (and costume designer Louise Stjernsward) are conscious of style, trends, the characters in each scene. (When Rita meets Richardson’s character, the Secretary of State for Employment and Productivity, they discover similar tastes in fabric.) Cole’s usual cinematographer John de Borman (“The Full Monty,” “Ella Enchanted,” “Hideous Kinky,” Michael Almereyda’s “Hamlet”) frames gently in soft light, encompassing the possibility of change rather than indicating industrial disrepair and cultural despair. Bob Hoskins plays their endlessly pleased union representative, and he has several magnificent moments, including his look of delicious delight when Rita stands up to the unhappy gentlemen of management. Cat; canary. When his union superiors quote Marx in saying that the men who are miners are more important than their cause, he practically levitates, citing another remark: “Progress can be measured by the social progress of the female sex.”

The women are refined: the men of management look like the pallid cousins of the second rank of “Mad Men” extras. There is condescension here: comb-overs and comb-backs have seldom been installed so damningly.

The issues remain, even in the United States. And would an industrial giant pull up stakes and work where the workforce is more complacent, more willing to work for killingly small wages? Jeez, that’s timeless, too. There’s that to engage an audience. But first and foremost? “Made in Dagenham” is a success story well told, and the real women strikers of Dagenham from four decades ago show their resounding brass under the end credits.

“Made in Dagenham” opens Wednesday, November 24 at Landmark Century.