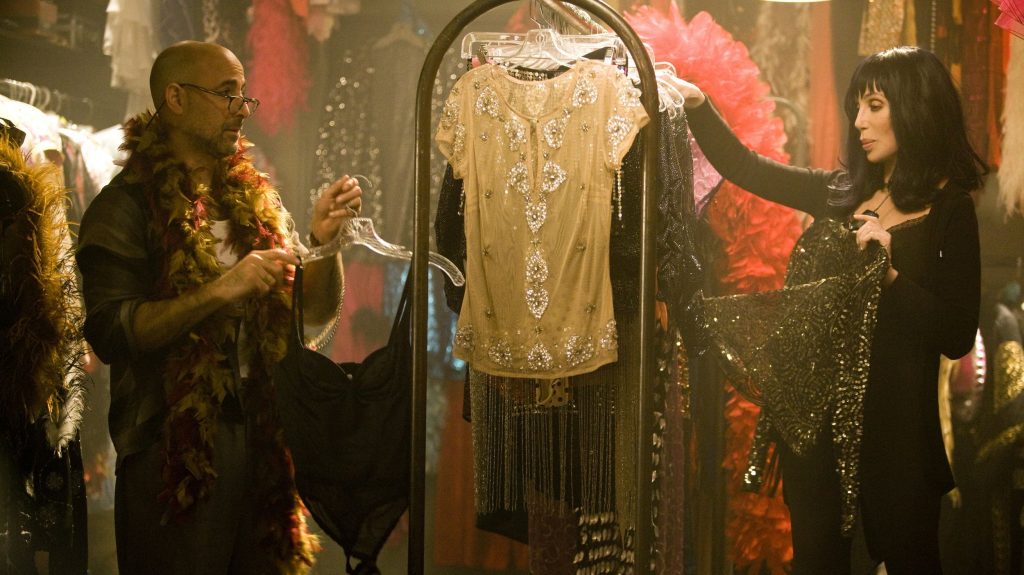 Limber young women in garters gyrate and scheme, live and love, hope and dream. That would include Ali (“short for Alice”), the small-town Iowa girl with large pipes, mom-less since the age of 7, played by Christina Aguilera as well as Cher’s fading boss of a Los Angeles burlesque palace called, fittingly enough, “The Burlesque Lounge.” They all came west in search of their own deeply felt sense of movie-musical cliché. Sex is indicated, but what’s the baddest threat to life, liberty and the pursuit of “Burlesque”? Money. Real estate. A large, wide Sunset Boulevard skyscraper in the making. That emblem of phallic consequence—and vast sums of fiscal investment—weirdly suits the second feature by writer-director Steven Antin, brother of Robin Antin, proprietress of The Pussycat Dolls, who founded that burlesque enterprise in 1995. While Jonathan Rosenbaum famously described “Pulp Fiction” as something whipped up for “the 14-year-old male closet queen in each of us,” Antin’s slick, likeable confection, made for a reported $60 million, lands squarely in the laps of teenage girls, middle-aged women and gay men. There’s nothing subterranean here, for better or for worse; the film’s brisk, breezy cheekiness is way out in the open. It hits all its marks splendidly: it’s kitsch that never turns Quatsch. Verbally, “Burlesque” makes restless volleys of the flip and the glib, camp and kidding. The choreography, credited to Denise Faye, sups mightily at the fount of Le Fosse: call it “All That Jizz.” It’s a fever dream on kiddie cough syrup, a polished yet prehensile wet dream of so many cultural and subcultural gestures. Cher’s big solo number, on a darkened stage lit only by a deep blue follow spot and a ghost light behind her, is simple yet shameless. “Last of Me”? Not yet. Stanley Tucci, as Cher’s costume maker and gay best friend is, as ever, punctilious with perfected comic timing. There are several uncommonly blunt reports on the film’s contentious production and post-production, the most entertaining of which you’ll find in the L. A. Times. With Cam Gigandet, Kristen Bell, Eric Dane, Peter Gallagher, Isabella Hofmann and glimpses of Alan Cumming. 112m. (Ray Pride)