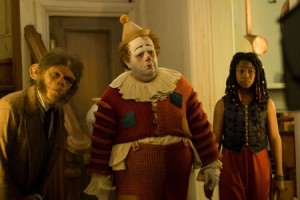 Russian director Andrei Konchalovsky (“Tango & Cash,” “Runaway Train”) delivers the dimmest and least dimensional 3D film of the year. It’s Christmas in Vienna in the 1920s. Uncle Albert (Nathan Lane), a daffy relativist with an Einsteinian hairdo, entertains 9-year-old Mary (Elle Fanning) and her brother Max (Aaron Michael Drozin). In a twist of bewitching, the kids are transported to a rodent Nazified realm under the thumbs of the Rat King (John Turturro) and his mother (Frances de la Tour) where long lines of forlorn children are forced at gunpoint to toss their dolls and toys onto towering piles. Long conveyor belts feed these cherished belongings into the maws of terrifying furnaces. Towering smokestacks billow ominous smoke, while ash-white leaflets fall like snow on the streets below. Mary topples the mean totalitarians to reinstate The Nutcracker (Charlie Rowe) to his rightful throne. “The Nutcracker in 3D” is not for fans of Piotr Tchaikovsky’s score. Far from balletic, this noisy-yet-inert CGI-action fare likely bears little resemblance to the Imperial Russian Ballet’s 1892 premiere in St. Petersburg of the opera based on E.T.A. Hoffmann’s 1816 children’s tale “The Nutcracker and the King of the Mice.” With Richard E. Grant, Yulia Visotskaya and the voice of Shirley Henderson. 101m. (Bill Stamets)