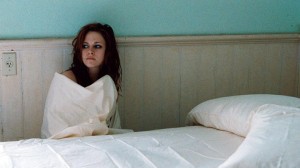 I don’t blame the photographer William Eggleston for committing any sins, just the filmmakers whose blood runs cool as a reptile with the essentials of the master’s style. In “Welcome to the Rileys,” the second feature from Jake Scott (“Plunkett & Macleane”), it’s Eggleston-over-easy in virtually all of the film’s quiet, scenic compositions in both an emulated Indianapolis and a post-Katrina New Orleans. Frame-to-frame, symbol-to-symbol, you could be flipping through a gifted young photographer’s Blurb- or-Lulu printed lookbook. The script’s a patch of tidily constructed miserablism, with James Gandolfini’s 52-year-old plumbing contractor evading several necessary forms of mourning and going off the grid after escaping to a convention in Louisiana. Less Crescent City than catalyst city, the French Quarter offers Doug Riley convenient ways of coping, including taking a stripper under his wing, the multiple-monikered “Mallory” (Kristen Stewart), who is a 16-year-old runaway. He moves into her scatty neighborhood—the Ninth Ward, if you believe the consistent holler and swoop of passing freights—and makes the gesture of cleaning her up, as well as her filthy bolthole of a place: banging trash cans and rustling bags from Ace and Kmart, he’s her knight with a shiny rodder. Both actors are painfully endearing, as is damaged, abandoned wife Lois (Melissa Leo). These actors are exquisite miniaturists. Gandolfini’s slow-burn miffs and tiffs are fine, and Stewart’s exquisite and vital facial features are in full play. Still, Scott (and screenwriter Ken Hixon) are condescending to the figure of Lois, portraying her at first with a pulse the equal of the sustained errrrrrrrmmmmm sound of an opening overhead garage door. (Leo triumphs, lavishly, once her character goes off her meds.) Mallory is explicit about the sexual acts she performs, and Stewart is game to capture the straggly gamine, down to the third act’s riot of simulated pimples and cold sores that pock her face. (Barelegged for the most part, Stewart shows the makeup designer’s skill at skidded shins and wayward bruise.) Most times when signage appears, Scott again acts the fine-art photographer: a cagy “PFFFFFFFT!” is matched by the final frame, which offers as its exit a dark entrance of “WELCOME.” You cannot save the world, but you can hope to tidy it. With, briefly, Ally Sheedy. 110m. (Ray Pride)

“Welcome to the Rileys” opens Friday at Pipers.