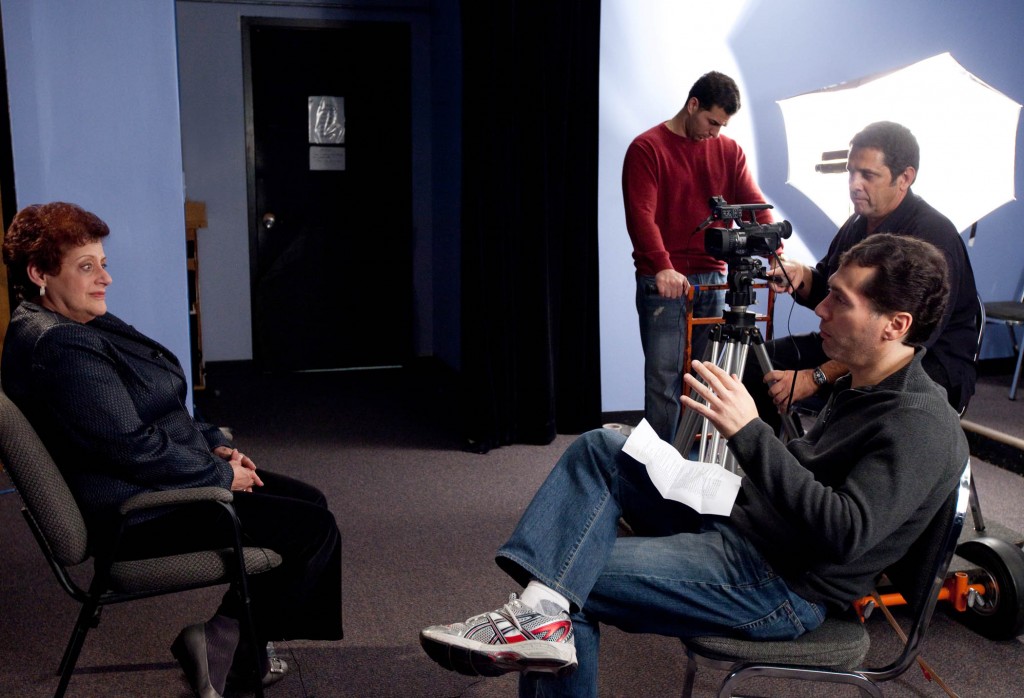 Documentary film sets, when not shot on location, tend to be surprisingly low-key compared to their multimillion-dollar blockbuster counterparts. No fabricated scenarios, rather a few strobes to balance the circumstantial light. While the rest of the office building on LaSalle Street remains quiet and deserted on a dreary Sunday afternoon in November, Act One Studios hums with the movement of an industry that never slows. A matinee performance features some of the studio’s students in one room, and two filmmakers, two sisters, two kids, a publicist, a photographer and a journalist are decamped in another.

When filmmaker Nick Celozzi joined director Dimitri Logothetis about eight years ago to produce a television biopic on Sam Giancana, the pair became enraptured by his larger-than-life character. “What was fascinating,” says Celozzi, who is actually Giancana’s great nephew, “was more than the blueprints of how (organized crime) worked. It was how interesting the man was, how complex he was.” Adds Logothetis, “Without him, I think history would have gone a different way. It’s a really interesting American tale.”

The guests of honor, however, are two ladies named Francine and Bonnie, here to set the record straight. Decades after his death, the sisters have vowed to convey the truth about their notorious father, Sam Giancana. Most probably recognize the name as mid-century Chicago mob boss extraordinaire, but outside his public persona, he was a devoted husband, a caring father and a generous friend, they say.

“We’re not trying to glorify or take away the obvious of what he [did],” explains Celozzi. “We want to fill the back story of where he came from, his home life, his personality, what made him tick.” Celozzi and Logothetis will incorporate anecdotes from FBI transcripts with hours of home movies, interviews and letters with family, friends and associates. They aim to reveal the man behind the stories and the reality behind the rumors, allowing different perspectives to shape the audience’s perception of Giancana the man, not just the mob boss. “Let everyone else determine who all these bad guys were,” says Logothetis.

Between takes, the sisters politely answer a few questions, but it feels almost meddlesome to probe them further. Inside the interview room, a classroom-type space with a few desks and built-in carpeted rafters, Celozzi sits one leg crossed over the other, with a clipboard of questions, across from Francine, back straight in front of black curtain, lit by a few strobes to remedy the harsh fluorescent lights overhead. Logothetis rests a foot above the floor on a wheeled platform, eyes behind the camera, gently pushed and pulled by the stagehand to alter the frame ever so slightly, one long moment to the next.

“He was a very gentle person, with my mother and me [and my sisters],” Francine responds, camera rolling. She stifles the tears welling in her eyes, breathes deep, looks up and around. “He walked into a room and everybody turned their head.” She is, as Celozzi later explains, “becoming vulnerable, taking time, reliving moments.” It creates a genuine rawness that might be impossible to capture any other way, without the input and blessing of family.

Francine, the youngest, and Bonnie, the middle, of Giancana’s three daughters, are stepping into the limelight for the first time in their long lives. Their oldest sister, Antoinette, published a book in 1984 called “Mafia Princess” about her life as a mobster’s daughter, which she wrote without input from her family. In fact, the book suppressed the existence of her two sisters, “which was basically fine,” Bonnie admits. “Quite frankly, we preferred our private lives.”

“It took us a long time to come out of the closet, as you may say, thirty-five years,” Francine says, acknowledging Celozzi’s family tie as the impetus for their involvement with the film. “Now we just want to do this, get the truth out, make it a little softer.”

Celozzi tells his cousins, Francine and Bonnie, “If you believe in your faith, you believe that he [their father] is hearing you.”

Stitching together friends and foes, family memories and government allegiances—Giancana was tied to John F. Kennedy’s election and Fidel Castro’s attempted assassinations—Logothetis and Celozzi are creating a tapestry of a prominent man, a businessman but, perhaps above all, a family man. His wife’s early death hit him hard, and the film will reveal what made Giancana who he was, from boy to man, mobster to father. Logothetis, describing the allure of such a powerful man, says, “I like to say, if Tony Soprano was mayor of New Jersey, Sam Giancana was Vice President of the United States.” (Kristine Sherred)

“Momo: The Sam Giancana Story,” will be released this spring at the 2011 Cannes Film Festival and will play at the Chicago International Film Festival next fall.