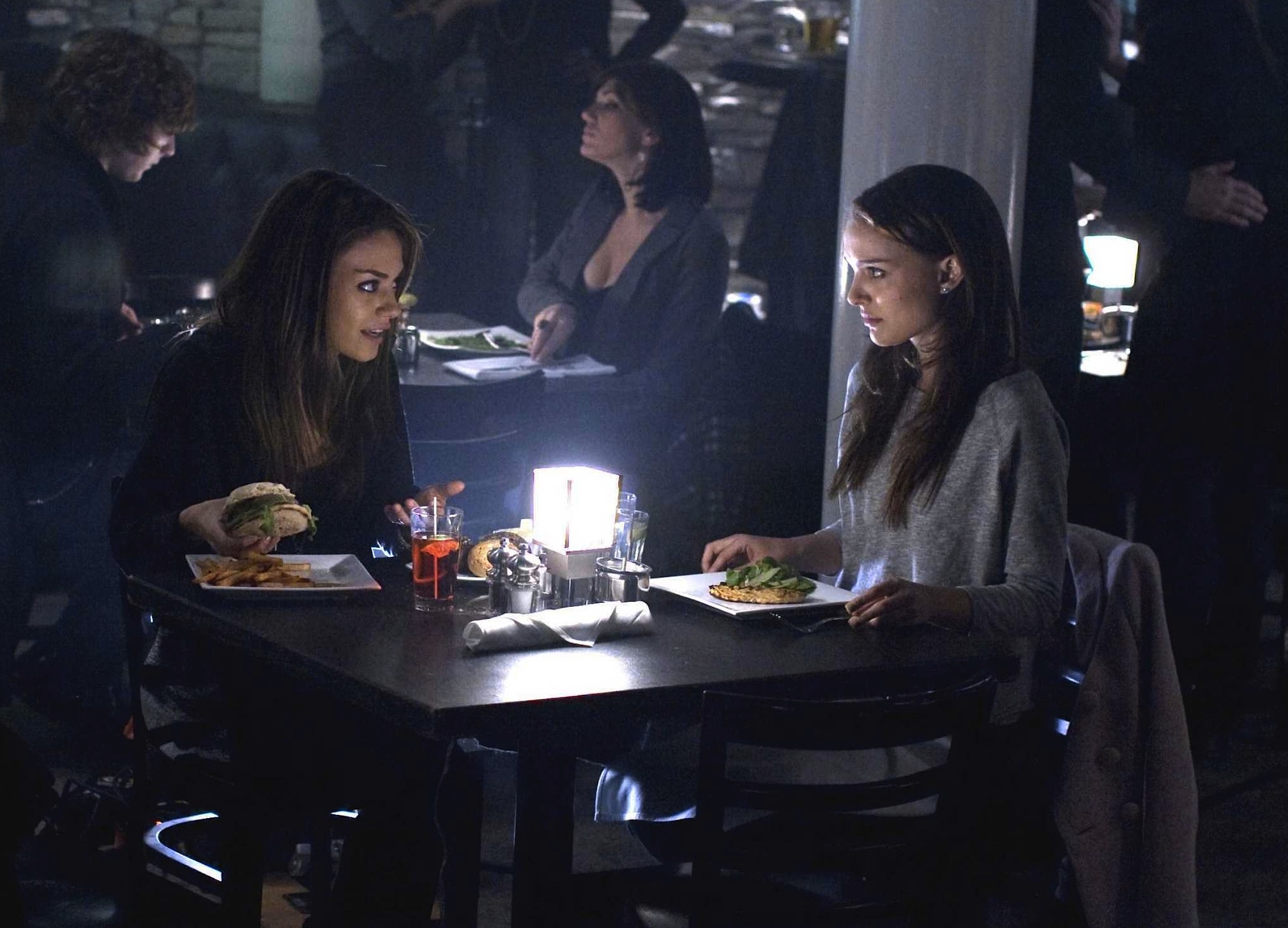 Darren Aronofsky’s upscale horror movie began with the director’s fascination with Dostoevsky’s 1846 novella, “The Double.” The long-in-the-thinking result, “Black Swan” begins at anorexic screeching fear and self-loathing and then lurches from there. Natalie Portman plays Nina Sayers, a thirty-ish dancer dying to play the split-character role in Tchaikovsky’s “Swan Lake.” She has to impress her New York dance company’s director, Frenchman Vincent Cassel (who pirouettes in flat-front trousers and likes a bit of blood). But she almost must evade the “Carrie”-like ministrations of her mother, a hard-bitten Barbara Hershey, all the while worrying she’ll go downhill like the dancer who preceded her (a deliciously snappish Winona Ryder) or be surpassed by an up-and-comer (petite, vital Mila Kunis). Simultaneously pretentious and lurid, ripe with mirrors, doubles, mirrorings, dopplegangers, “Black Swan”‘s temper is pitched at the level of a Brian De Palma adaptation of Polanski’s “Repulsion” that’s convinced it’s being directed by Stanley Kubrick. Or maybe it’s just “Exorcist IV: En Pointe.” The cracking of fresh-flexed reddened toes set up the rigors to come: some may be more alarmed by close-ups of busted toenails than the puffy, punched face of Mickey Rourke. She’s a snipper-cutter-scratcher and the black-white-and-mirrors visual scheme only blooms at wrecked flesh. In the rehearsal studio, above wall-to-wall mirrors, head-and-shoulder silhouettes ring the room, cutout black-paper chiaroscuro, like the work of artist Kara Walker. The rigid pattern extends to smallest details, such as a composition of a tense confrontation set off by several perfectly crumpled sheets of white paper balled up in a black mesh trash can under a desk. “Perfection is not just about control it’s also about letting go showing the audience transcendence,” Nina is told. (Cue directorial smirk.) Air rushes into the room with images like a gash on a calf, a vaginal gawp of a wound. Think: Dentata the Menace. As sexual tension rises, a near-red flower beside a mirror blooms like labia. Kubrick homages arise in a dance scene on E, like a sped-up coming-to-awareness from “2001,” followed by emphasis on a foyer mirror in Nina’s apartment that matches the octagonal-ish interior of the ship. Still, it’s all of a piece, from bony Portman to Sayers’ descent, and the ending is weirdly perfect and satisfying. 103m. (Ray Pride)