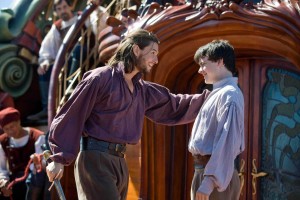 On the 253rd day of enduring his two cousins displaced by the Luftwaffe bombing of London, the disagreeable Eustace Scrubb (Will Poulter, “Son of Rambow”) scribbles in his diary: “Investigate legal ramifications of impaling relatives.” He cannot stand their nattering about Narnia, a fantastic kingdom of chatty satyrs, centaurs, minotaurs and minoboars they visited in the 2005 and 2008 installments prior to “The Chronicles of Narnia: The Voyage of the Dawn Treader.” All three were written by Christopher Markus and Stephen McFeely, based on the childrens’ book series by lit prof and theologian C.S. Lewis (1898–1963) that were published in the 1950s. Screenwriter Michael Petroni is also credited for the third, the first in 3D. The live action was converted; the CGI was created in 3D; both work quite well. The magic wardrobe leading to Narnia in the first film is here replaced by a portal that recalls Michael Snow’s structuralist film “Wavelength” (1967) that framed a seascape hanging on a loft’s wall. Waves in a painting hung on a bedroom wall begin to move, then splash onto Eustace as he tussles with his cousins Lucy Pevensie (Georgie Henley) and Edmund Pevensie (Skandar Keynes). A deluge ensues. The kids swim to the surface, where they’re rescued by the crew of The Dawn Treader, a ship in the painting. The outlanders join the Narnians to save Narnia. They read spells in the book of The Oppressor, recover seven magic swords, thwart slave traders, evade malevolent green mists and “defeat the darkness within.” The voyage ends with our travelers rowing across a sweet-tasting sea blanketed with white lilies to behold a towering mega-tsunami-like standing wave. This is the threshold to a legendary country at the end of the known Narnia. Its master is the majestic lion Aslan (voiced by Liam Neeson) who originally sang Narnia into existence. His supernatural powers match Cecil B. DeMille’s parting of the Red Sea. Michael Apted (“Coal Miner’s Daughter,” the “Seven Up” documentary series) directs this fine adventure fantasy with respect for its affirmative Christian allegory. With Ben Barnes, Gary Sweet, Terry Norris, Bruce Spence, Bille Brown, Laura Brent and Simon Pegg voicing a valiant mouse. 112m. (Bill Stamets)