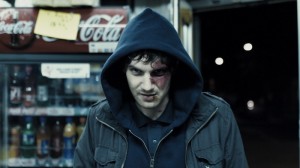 When he first sidled his sinister way into movies, writer Philip Ridley, whose work includes disturbing paintings, plays and children’s books, seemed like a talent that wouldn’t need nurturing. With his handful of deeply imagistic, unforgettably tactile movies like “The Reflecting Skin” (1990) and “The Passion of Darkly Noon,” (1995), starring Ashley Judd, Brendan Fraser and Viggo Mortensen, as well as his script for “The Krays” (also 1990), Ridley was the rare English auteur who announced himself via cinematic (instead of literary-sociological) storytelling. Then silence, on screen, at least. A third feature, his first in almost fifteen years, the gleeful horror “Heartless,” is in many ways as strange and wonderful as his earlier work, set in the East End of London where he lives and works. Victimized boys from his earlier work are now a victimized man: Jim Sturgess plays a shy, birthmarked 25-year-old photographer who starts to imagine the youth on the streets at night in their hoodies may be supernatural creatures that grace his already infernal idea of the urban world around him. Ridley and cinematographer Matt Gray show a command of color and frame to sustain the sweetly grisly mood, along with intermittent eructations that suggest nightmares inspired by David Lynch. The apocalyptic ending is a winner. With Clémence Poésy, Eddie Marsan. 113m. (Ray Pride)