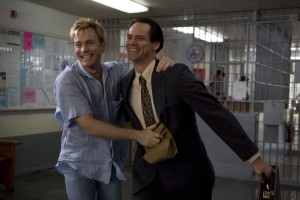 One of many indexes of how the economics of the movie industry have changed: it’s taken almost two years to get an outrageous farce starring Jim Carrey, financed by Luc Besson’s Europa, onto American movie screens. And, after seeing it, its strengths may be part of its commercial challenge. As one Steven Russell, this is the best the manic, protean Carrey has been in memory, spectacularly assured and over-the-top at once in a based-on-fact-really story about one man’s pursuit of several American dreams while living a lie… or two… or five. Brightly colored, whirlwind-paced, cheerful to a fault, “I Love You Phillip Morris” is a profane, loopy wonder. “Sometimes you have to shave a little off a puzzle piece just to make it fit,” Steven rationalizes in the narration. After ten or fifteen minutes of headlong setup, the pieces start to fit: Steven not only concedes he’d always been gay but decides to live what’s left of his life to the fullest, “living as high on the gay hog as I wanted to.” The debut feature by co-directors John Requa and Glenn Ficarra extends a comic premise they demonstrated in their script for “Bad Santa.” Carrey’s character is exponentially more demonstrative than Billy Bob Thornton’s in that bleak comedy. But again, the best comedy often comes from pain. When Steven goes to jail, meets and falls in true love with fellow convict Phillip Morris (Ewan McGregor), the film turns tender. (One would hope Johnny Mathis never imagined “Chances Are” to be accompanied by simultaneous sex and prison riot.) Preston Sturges would have appreciated the satirical trappings of Requa and Ficarra’s film, but the glissandos of profanity would likely, as with many audiences even today, take him aback. Still, despite its slingshot shifts in tone, like an eager, determined pup, at the substantial number of comic heights, “I Love You” takes a sniff at the butt of greatness. The cinematography by Xavier Grobet is electric gumball goodness. With Leslie Mann. (Ray Pride)

“I Love You Phillip Morris” opens Friday at Landmark Century.