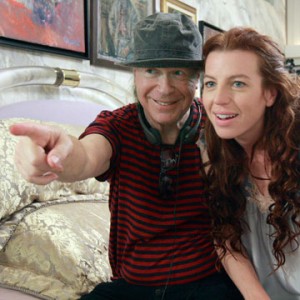 Under Andrew Sarris’ classification system in his “American Cinema” of more than four decades ago, Henry Jaglom might well have wound up under the heading of “Subject For Further Research.” That is, if you consider his role as a businessman-cum-filmmaker, someone whose career consists almost in its entirety of self-financed, self-distributed movies that are, for worse and for not always the worse, identifiable as his own. His latest, “Queen of the Lot” is a sequel of sorts to his earlier “Hollywood Dreams” and it traffics in the same wilted romanticism about the glory days of Hollywood and pretends that peaked fantasies about stars and studios dance in the heads of recent generations. His characters are like turkeys: if it were to rain in Los Angeles, they would look up with fascination, wide-gulleted, and quickly drown. If you can get past the first fifteen seconds of the movie, with the faux-deco fonted “A Rainbow Picture” logo superimposed over an image of a 1970s Orson Welles clutching a small rainbow, you’ll be treated to a mother-daughter duo awaking to a late-night movie broadcast and scatting “When you wish upon a star” on the couch. Feminine? Emotionally stunted and/or implausible. Characters talk a lot about feelings in a way not refreshed (or refreshing) since the 1970s, making the slog a comedy of eras. Characters fear emoting in public: someone might take a “casual looky-look… while I’m spilling my guts.” The camera swoops or zooms at eccentric intervals; the first scene proper finds its deluded protagonist, the would-be “queen of the lot,” belly-down on her bed on the phone, and the shot zooms to the untended soles of her bare feet up in the air and then only down to her face. Maybe some viewers will realize she’s wearing a security bracelet on her ankle but it looks both corny and porny. With Noah Wyle, who looks young and acts old, David Proval, Zack Norman, Diane Salinger, Dennis Christopher, Paul Sand and Simon O. Jaglom and Peter Bogdanovich as “Pedja.” “I heard you were remaking a Lubitsch film,” someone coos at the deadliest dinner party outside of the kind of cross-species fairytales that never end well. “Oh, it’s a terrible idea, it’s the worst idea I’ve heard in twenty years,” Pedja says. He wasn’t listening when Jaglom pitched him, then. Bogdanovich’s cravat-maker remains uncredited. If not a force of nature, at the very least, Jaglom remains a force of sustained accountancy. 120m. (Ray Pride)

“Queen of the Lot” opens Friday at Landmark Renaissance in Highland Park.

[…] This post was mentioned on Twitter by who, Ray Pride. Ray Pride said: I have not learned to love me some Henry Jaglom. http://bit.ly/eRSeRV […]