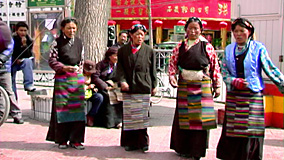 Ngawang Choephel’s “Tibet in Song” is much more than the travelogue its simple title might suggest, instead tracing the story of his native land, beginning with his own story before and after his six-year imprisonment by Chinese authorities for attempting to chronicle the remnants of the Tibetan culture they are determined to eradicate. The Tibet-born, India-raised musicologist-filmmaker’s experience provides a focus for a larger picture of what Tibet has faced under decades of Communist rule. Choephel’s fierce focus shows a rare sort of perseverance, as an individual, as documentary, as a culture that is twisted in every possible way by its occupiers. It’s heartening filmmaking on a dispiriting subject. 86m. (Ray Pride)

“Tibet In Song” opens Friday at the Music Box.