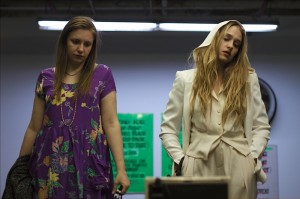 Aura needs space, but she doesn’t know how much.

In writer-director Lena Dunham’s canny, oblique comedy-drama “Tiny Furniture,” she also plays Aura, a 24-year-old recent college graduate who returns to the family home in New York City, not quite ready to find her adult role in a city she’s grown up in. Her performance videos on YouTube have gotten a few hundred hits; her film studies degree doesn’t offer any chance of immediate employment. Time to grow up. Now.

A secondary level of interest is that the low-budget production was shot in her family’s Tribeca loft. And Dunham’s mother, fine arts photographer Laurie Simmons, plays Aura’s fine arts photographer mother, Siri and her younger sister, Grace, a precocious prize-winning poet, plays Nadine, yes, a poet. Nadine’s played as a terrible humorless hard-ass of a statuesque little sister; Siri seems confounded by Aura’s acting-out until the discovery of the mother’s 1970s Soho-set journal that reflected behavior almost as irresponsible as the daughter’s. The often-discomfiting intimacy is redoubled with that knowledge, and Aura’s quest for space: the bedrooms of the pricey-placed loft are as tiny as dorm rooms. The first of many non-events in Aura’s post-collegiate follies is the discovery of her dead pet hamster, a sly joke at the confines of the home: its flush white cabinets and bare walls make it a warren for its trio of warring female protagonists.

She situates Aura in the warm lap of privilege and supernally “cosmopolitan” upbringing, yet quietly mocks the characters who describe themselves with adjectives like that. Dunham specializes in comedy of quiet mortification, and her character goes through a series of embarrassments and humiliations she largely brings upon herself. (Her comedy of mortification is advanced enough that she is currently editing a pilot for an HBO series produced by Judd Apatow.)

Enter: Aura’s men. Aura has a four-year liberal arts degree, a casually profane wit, wide, often-sad eyes and an ample nose that sits royally in the midst of her round face. She exposes her scattered ruck of spidery tattoos, spiky houses on her shoulder blade, and so on. Perfectly contemporary and snark-next-door pretty. Jed (filmmaker Alex Karpovsky) is ostensibly a filmmaker “in town for meetings,” building off the exposure of his series of “Nietschian Cowboy” [sic] videos, of which we mercifully only glimpse one. A grifter prick, a smarmy dick, he talks his way into sharing Aura’s bed but won’t offer the courtesy of a toss, and besides, “Girls sweat up the bed.” Karpovsky resembles David Groh, the actor who played “Rhoda”‘s husband, but Jed’s a simple shmuck. “I think you’re a genius, you ought to be on Saturday Night Live” is offered to Jed as a compliment. “It’s witty but it’s kind of goofy,” Mom disdains.

Why does the attractive-but-not-skinny Aura tolerate his behavior? Or that of Keith (David Call), the mustachioed chef at the restaurant around the corner where she takes reservations (and abuse)? Dunham’s scenes are confident and measured, but never alert you to where she’s going or what stage Aura is in in her emotional and sexual development. She stakes her spot in the place by baring her thighs around everyone, leading her sister to mutter, “Maybe just put on some pants!”

An old friend, Charlotte (Jemima Kirke) is her raging counterpart, impossibly verbal yet completely convincing (and frightening), a willowy blonde with an unplaceable accent who calls herself “Tribeca’s solution to Marianne Faithfull” and rambles off lines like “Listen… if you’re lonely, you can come with me back to my house and we could just take an Ambien and watch ‘Picnic at Hanging Rock’ or like ‘Christiane F.’ or something.” That’s somewhat untypical; much of the comically inclined bits of dialogue have a characteristic lilt, where spoken rhythms hide the humor, not one led by punchlines and heavy-weather wordplay. ” I just broke up with a male feminist after three years,” Aura tells Charlotte after a runamok passage of dating advice, “I’m not a cock grabber.” What does Siri think of Charlotte? “You reek of cigarettes and I owe your mother a phone call.” And their exchange: “Do you have the same sense of entitlement as my daughter?” “Oh believe me, mine is much worse.”

“Tiny Furniture” boasts a blunt wide-screen splendor, even more impressive on second viewing. Whether a shot is static or tracking, there is gravity, acuity. Cinematographer Jody Lee Lipes has worked on several movies released in the past year, including his own doc, the artist portrait “Brock Enright: Good Times Will Never Be The Same,” and the lushly beautiful, minimalist “Two Gates Of Sleep.” In each project, the use of symmetry and color is pronounced, even in a film like this, shot on a Canon 7D HD-DSLR still/video camera. A visual sense of confinement and release is capably designed throughout. These are quiet compositions. Aura whines, but Dunham’s film hardly needs to shout.

Late, Aura gets stoned with the chef and clumsy, humiliating sex ensues, an urban post-industrial, claustrophobic variation of Alice finding herself exposed in the rabbit hole, followed by a confession to her bewildered mother. What comes next could sound like the most banal kind of conclusion, a small panic between the two women that comes from the sound of a ticking clock. That description doesn’t give away the moment’s weird, breathtaking power. How Dunham paces, plays and ends that scene does not offer up an immediate meaning, a “correct” interpretation. There is ticking, ticking, but the detonation is muffled. It took my breath away; it almost does thinking of it now.