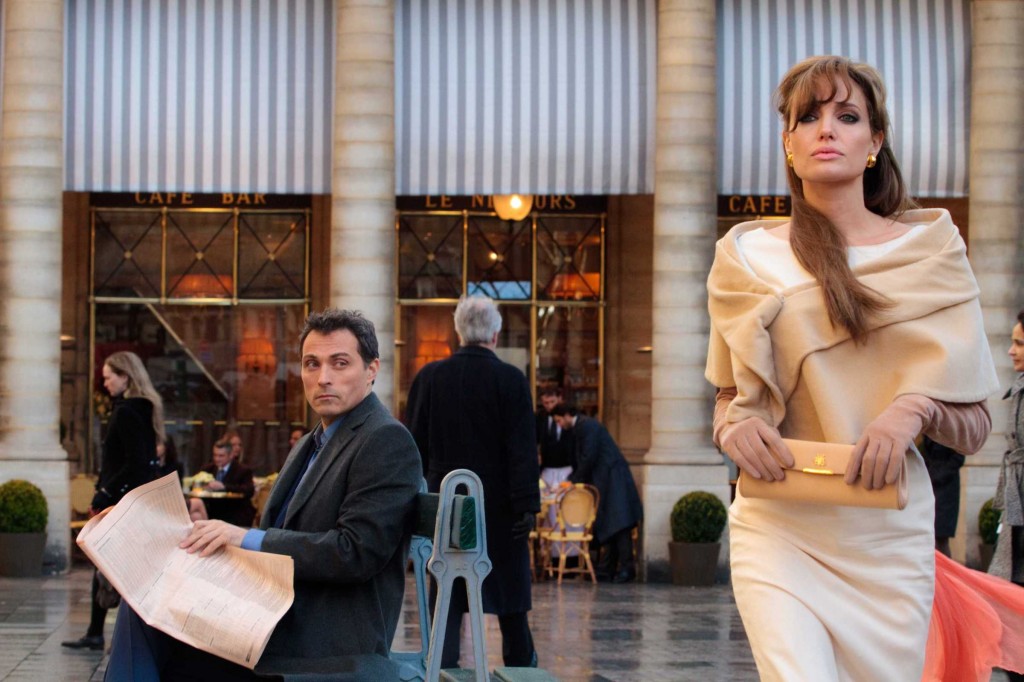 “Heavy” is what Angelina Jolie calls “The Lives of Others,” the first American film by Florian Henckel von Donnersmarck. “Florian is probably one of the most intelligent human beings I have ever met in my life,” she states in the press notes for “The Tourist.” A remake of Jérôme Salle’s “Anthony Zimmer” (2005), this is decidedly not heavy and not heady. Both of von Donnersmarck’s films are about secret-keepers and their chasers. “The Lives of Others” (2007) recreated the East Berlin of the 1980s under Stasi surveillance. Set in the deluxe quarters of Venice as surveilled by Scotland Yard, “The Tourist” riffs on seventies cinema and trips on its Janus-like ambivalence as a star vehicle. The screenplay by von Donnersmarck, Christopher McQuarrie (“The Usual Suspects,” “Valkyrie”) and Julian Fellowes (“Gosford Park”) suffers from semi-coherent dabbling in tones of homage and parody. Elise (Jolie) is an impossibly well-dressed Economics Specialist in the Financial Crimes Division of Scotland Yard who went undercover for a year as the lover of Alexander Pearce, the accountant of a casino and brothel mogul sought in fourteen countries. She fell into true, not tactical love but no longer knows what he looks like after he spent twenty million for plastic surgery. Her spying-on-her supervisor is unsure further pursuit adds up. The odds are less than one in a hundred that an investigation costing eight million has yet to recover the 744 million Pearce owes in back taxes. “The Tourist” is cavalier about currency: the above amounts vary between dollars, pounds and euros in the dialogue, which also includes a cute, flirty parsing of “ravenous” versus “ravishing.” Johnny Depp goes by the name of Frank Tupelo, a math teacher from Madison Community College in Wisconsin who is touring Europe because his girlfriend left him or because his wife died.

Both back stories are told. It doesn’t matter. Neither are true. He’s about to meet someone else. Elise, whose surname is sometimes hyphenated and sometimes not, gets a note from Pearce instructing her to board the 8:22am train from Paris to Venice, pick out a male passenger that fits Pearce’s approximate size and then pretend to know him quite well. This is supposed to trick her colleagues in law enforcement. That random male passenger reading a spy novel turns out to be Frank, who acts out of his league when the stunning Elise invites him to her lavish canal-side hotel suite. Chases and capers and two kisses ensue. There’s a little comedy at the expense of euro-cops. The Italians get the worst of it with a Tati-like synchronized stake-out. Elise makes entrances where all eyes are truly on her, like an ogling “sight gag” bit in a Frank Tashlin film with Jayne Mansfield. But caricature of Sophia Loren vehicles is not the obvious point of “The Tourist,” which intends to entertain without irony. Unfortunately, James Newton Howard’s mawkish score lacks the retro wit seen in the eyewear, costumes and decor. With Paul Bettany, Timothy Dalton, Steven Berkoff, Rufus Sewell, Christian De Sica. 103m. (Bill Stamets)