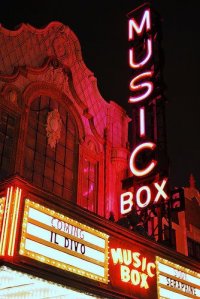 Christmas in Chicago brings to mind a lot of images—store windows on State Street, the tree in Daley Center—but for a lot of Chicagoans it’s singing along to Christmas carols with 750 of their closest strangers in an old-fashioned movie house and yelling at the screen during “It’s a Wonderful Life.” This Friday, for the twenty-seventh year in a row, The Music Box Theatre will be hosting its annual Christmas Show featuring carolers, sing-alongs, Santa Claus, “White Christmas” and, of course, “It’s a Wonderful Life.”

“It’s a living tradition,” notes Brian Andreotti, The Music Box’s Program Director. “You see the excitement as you talk to people who have been coming for five, ten, fifteen, twenty years, people that have left Chicago and fly back. What on paper seems like a simple event, people are pretty connected to it.”

Indeed, the event has grown so popular that the Music Box has had to keep adding shows to meet the demand. What started as a one-shot lark on a Christmas Eve in 1983 has gradually become a six-day extravaganza with seventeen performances, almost all of them selling out.

“You can’t be cynical about the holidays and still do this,” says Dennis Scott, the Music Box’s organist. “Everyone is there to have a great time; people come in wearing Santa hats, it’s more than just watching a movie. You can see ‘It’s a Wonderful Life’ anywhere on TV but there’s something different about watching it on the big screen with 749 other people.”

In what has become part of the tradition, the audience will boo and hiss at Mr. Potter, applaud George Bailey’s speech, and ring Christmas bells anytime Clarence the angel is on screen.

“The audience response all through the whole thing is pretty vocal,” says Scott. “Almost like a cult film. I don’t want to say ‘Rocky Horror’ but it’s almost that level.” (Jonas Simon)

Tickets can be purchased from the Music Box Theatre Box Office from 4pm to 9pm daily at (773)871-6607 over the phone, in person at 3733 North Southport, or online at musicboxtheatre.com/collections/27th-annual-music-box-christmas-show/.