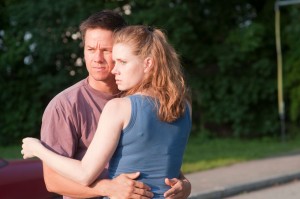 “The Fighter” is a curiosity, a loud, ragged attempt to recreate a little-man-wants-to-be-big fable after the style of “Rocky,” from the director of “Three Kings” and “I Heart Huckabees.” The project is a long-cherished labor of love for producer-star Mark Wahlberg; several directors, including Darren Aronofsky, had tried the based-on-fact Boston-accented tale on for size before Wahlberg brought David O. Russell on board. Two half-brothers raised in Lowell, Massachusetts are boxers. The elder, Dicky Eklund (Christian Bale, jacked up like a failed Steppenwolf audition), is a mush-mouth crackhead and clueless conman who blew his chances, his title, his life on drugs and stupid behavior. The younger, “Irish” Micky Ward (Wahlberg) is a welterweight with a heavyweight problem: aside from Dicky being his irresponsible excuse for a trainer, he’s surrounded by a flotilla of gorgons in the form of his sisters. I couldn’t tell you how many there are, since the storytelling esteems unruly facts instead of fluent drama, but every single one of their hairstyles is a libel against the Irish and the working class. (How do you say “Snookie” in Gaelic?) Melissa Leo plays their mother, and her performance is almost as out-of-whack as Bale’s indulgent tics and gargles and to-be-expected emaciation of his body. One of the least tolerable aspects is the conception of Leo’s character by Russell and screenwriters Scott Silver, Paul Tamasy, Eric Johnson and Keith Dorrington. Alice is so reptilian in her ignorance, vitriol and self-delusion that you want to look away. Or ideally, look toward the midriff-baring bartender, Charlene, played by Amy Adams. Adams is in fine, feral fetal as a no-nonsense barmaid from another time and another, better story. Cinematographer Hoyte van Hoytema (“Let The Right One In”) understands precisely how to enshrine Adams’ tough performance and the strength beneath her pale features instead of going for princess-like idealization. Leo rages. Then rages some more. You could get wrinkles on your forehead just watching Alice’s foul-mouthed, splenetic outbursts. (In its own way, this is a compliment to Leo’s talent and drive.) Wahlberg projects goodness well, but it’s easy to quickly tire of the howling furies driving his life into the ditch. There’s a strange scene where Micky and Charlene are stripping and the foreplay seems to suggest doggy-style sex is in the offing but they’re interrupted by the howling pack of sisters, determined to kill the interloper influencing their brother’s boxing career. The curdled sarcasm, failed slapstick and lack of dramatic focus are all hallmarks of Russell’s recent work: a story of uplift inevitably reflects his directorial fashion, leaving a bloody taste of emotional fraudulence from the smug caricature of its loathsome characters outside of Micky and Charlene. “The Fighter” fights itself, eventually going down for the cliché count. It’s a gimp. 114m. Widescreen. (Ray Pride)

[…] This post was mentioned on Twitter by Sei Jin Lee, Ray Pride. Ray Pride said: Not rooting for THE FIGHTER: http://bit.ly/gOXR0b […]