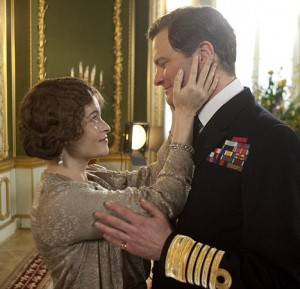 Any complaint that “The King’s Speech,” a spirited two-hander for indelible acting by Colin Firth and Geoffrey Rush, ought to have been a play is foolish. Take that text and begone! Tom Hooper’s movie, from 73-year-old David Seidler’s script, is more than the sum of its words, preserving two ham-on-wry performances in a pig-headed reversal of “Pygmalion.” Firth plays the Duke of York, who embarrasses his father, George V, with his stammer and a chronic inability to speak in public. Helena Bonham Carter plays the yet-to-become-Queen-Mum in pre-dowdy but loving form, urging her beloved “Bertie” toward an unorthodox speech therapist in the mid-1920s, Lionel Logue (Geoffrey Rush), not only a commoner but Australian. While Hooper makes some unseemly choices with wide-angle lenses up in actors’ faces, most of the movie makes hay with Firth and Rush’s battle of wills, largely played out in the man from Down Under’s impoverished but picturesque digs. It’s not a great film, which year-end-awards handicappers seem to insist, but “The King’s Speech” is carpentered neatly with straightforward, middlebrow satisfactions. It’s also very funny in their Oscar-and-Felix byplay, rather than Oscar-and-Oscar banter, with a royal straight man playing to the deliciously clowning Antipodean. Playing Edward, the elder brother who abdicates for love (and a touch of perversion, the script suggests), Guy Pearce conveys exceptional pain and exceptional irresponsibility. With an entertaining if wholly misjudged Timothy Spall as Winston Churchill, as well as Claire Bloom, Derek Jacobi as a particular sour and sinister Archbishop of Canterbury, Jennifer Ehle, Anthony Andrews. 111m. (Ray Pride)