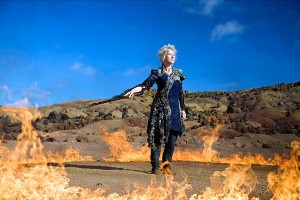 “The Tempest” is William Shakespeare’s “Lost,” suggests Tom Conti, who plays Gonzalo in this tame adaptation shot in Hawaii, as was the ABC-TV series. First staged in 1611, “The Tempest” too is set on an uncharted island stocked with marvels and maneuvers. Theater director Julie Taymor (“Spider-Man: Turn Off the Dark,” currently on Broadway; “The Lion King”) directs this version with less verve than her debut feature “Titus” (1999), another Shakespeare play that she directed on stage before reprising on screen. Taymor may prove more inventive at visualizing allusions in the bard’s four-century-old texts with puppetry and shadowplay than with CGI. With the exception of a stunning astral map designed by Kyle Cooper, most of the supernatural bits here are less than transporting. Replacing the original deposed duke Prospero, Helen Mirren (“The Queen”) stars as his widow Prospera. In political exile from Milan for a dozen years with her daughter Miranda (Felicity Jones), she conjures a shock-and-awe tempest with her magic staff. This shipwrecks old foes on her island inhabited only by the spirit Ariel (Ben Whishaw) and the slave Caliban (Djimon Hounsou). She subjects the lost seafarers to ploys and spells. This revengeful magician-cum-stage manager deludes and misleads her unaware audience, until baring her devices and revealing her agenda to wed her daughter to her usurper’s son. Despite a stellar cast and a handful of bravado touches, Taymor does not identify her own screencraft with Prospera’s witchcraft to spellbind us. With Russell Brand, Reeve Carney, Chris Cooper, Alan Cumming, Alfred Molina, David Strathairn. 110m. (Bill Stamets)