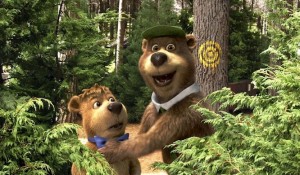 Warner Bros. Pictures puts two TV cartoon characters owned by Hanna-Barbera Productions into an awful live-action 3D comedy made for very, very young children. The nothing-there-ness of “Yogi Bear,” shot in New Zealand, is signaled by its title appearing in the black absent bottom of a plundered picnic basket. Yogi (voiced by Dan Aykroyd) is a gabby bear wearing a necktie and hat who steals “pic-a-nic” baskets, as he calls them, from visitors at Jellystone Park. If he’s a yogi, he’s fixated on the stomach chakra. Eric Brevig (“Journey to the Center of the Earth 3D”) directs a screenplay by Jeffrey Ventimilia and; Joshua Sternin (“The Tooth Fairy”) and Brad Copeland (“Wild Hogs”) with the line “I’m like a genus without a phylum” and a recurring gag about an adult blocked by a childproofed car window. To balance the town budget and launch his run for governor, Mayor Brown (Andrew Daly) plans to sell the park to loggers. Ranger Smith (Tom Cavanagh) and documentary filmmaker Rachel Johnson (Anna Faris) try to thwart him by wielding the lone specimen of a resident endangered-turtle species with an elastic, elongated tongue evolved for 3D effects. The unoriginal ending has the good guys leak gotcha video of the bad guy for all the townsfolk and news media to see. Shame and handcuffs follow instantly. Justice and a kiss come next. As for life lessons, three twosomes—Yogi and his bowtie-wearing sidekick Boo Boo (voiced by Justin Timberlake); Ranger Smith and his backstabbing deputy, Ranger Jones (T.J. Miller); and Mayor Brown and his obsequious chief of staff (Nate Corddry)—are dubious role models for siblings with status issues. With narrator David Stott, Greg Johnson, Christy Quillam, Patricia Aldersley. 83m. (Bill Stamets)