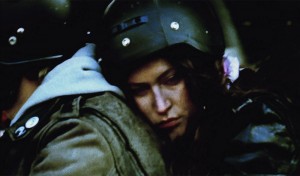 The moment is past but the moment is now: In 2009 Williamsburg, Shelly, a woman of 23 or so, (Stella Schnabel) contends with intense desires, average expectations, quotidian disappointments. Shelly’s inner life is suggested by a voice-over that’s as much interior monologue as it is diary entry or recitation to a therapist, as well as a visual style fashioned in multiple bold formats. There’s an intermittent score by Will Bates as well that uses a percussive tattoo like an accelerated heartbeat, shared by Stella and the film itself, in the same fashion Jon Brion did with his music for “Punch-Drunk Love.” Ry Russo-Young’s second feature, “You Wont Miss Me” (sic), at first glance resembles other contemporary low-budget, digital video idioms, but in fact, it’s a quietly constructed, sharply observed, unsentimental of-the-minute “Alice in Wonderland.” The final shot of the movie is a gorgeous slap, prompting that reference, ending with just the right note of the character’s knack for provocation but also her essentially uncentered existence. There are elements in Russo-Young’s filmmaking that I wouldn’t presume as influences, but as parallels that rang true to me. For instance, in the nonjudgmental approach to depicting Shelly’s instability but also youthful female sexuality, a fond comparison could be made to the sensual nightdream of Claire Denis’ “Friday Night.”

There is a blend of vigor and languor in a recurrent image of Shelly on the back of a motorcycle, a passenger with a helmet on, moving her hands and arms as if to take flight, as in Hou Hsiao-hsien’s way of observing his beloved, mercurial female characters, especially an image in 2001’s “Millennium Mambo” of Shu Qi lost in reverie as she rises through the sunroof of a car gliding through curves of nighttime Taipei and waves her arms in similar fashion. And I’m quite serious in comparing the palettes and editing style to the fistful of scenes that have been shown from Orson Welles’ as-yet-uncompleted “The Other Side of the Wind.” It’s jagged, but just-right. There are brief appearances by filmmaking colleagues like Greta Gerwig and Joe Swanberg. After a second viewing, “You Wont” still flows with a confidence that was present in Russo-Young’s first feature, “Orphans,” but comes fully into its own here. And star-co-writer Schnabel gives Shelly a strong presence, while embodying a fragile flower in full bloom in a bright shiny neon city.

There are quietly sophisticated elements throughout, from the pacing of Shelly’s moods and sometimes-brutal confrontations with female friends as well as the young dates she admires or wants, scruffy bedheads to a man. There’s also a simple compositional motif of triangular elements (a ladder on a mostly bare stage, a clock’s hands at 3:40, hands raised above heads) that imply the constant possibility of an emotional folding-in, a damaging implosion. Some information is sketched in with an offhand stroke: Shelly’s quick-bitten fingers; Williamsburg shown by a glimpse of the Peter Luger Steakhouse sign as a couple turn a corner and by a cab ride across that strange fabled bridge. The dialogue is naturalistic but with sweet quirks: “Not now but right now”; “It smells like babies covered with flowers”; a director speed-describes his “multidisciplinary multimedia extravaganzas”; “At least I don’t come across as a cry for help”; “You’re one of those people who’s gonna kill themselves in five years so I don’t want to say anything more and implicate myself.”

I could go on—even the less-than-lucid characters are observantly spoken—but I’ll end with this image, which is a bookend for me with the challenging final shot. Shelly and a friend go to Atlantic City to see a band whose lead singer she likes, wants. (Onstage, the guy has clown dots of rouge on his cheeks, feminizing his already androgynous features.) She and her friend fight, bitterly, but there’s a moment in the band’s hotel room where he’s fallen asleep. He’s folded up, jackknifed slightly more than going fetal, and his pack of Parliaments is on the bed inside this triangular composition. That’s beautiful form, but Shelly watches him sleep. Watches him sleep. Sweet boy who might smell like a baby and cigarettes, not nearly the Dionysian ideal she watched prance onstage. Behind her gaze, we hear the TV that’s on in the room. It’s an ad, a commercial for a lost puppy shelter. The heart breaks. Shelly’s eyes are wide and still. The song choices throughout are strong and suit each scene where they’re placed, and come to think of it, “You Wont Miss Me” is as much pop music as movie: lyrical, simple, with refrains, and yet in its final glance, unresolved.

“You Wont Miss Me” opens Friday at Facets.