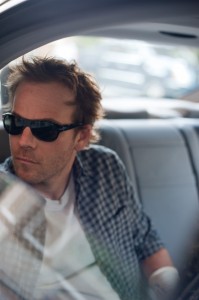 Sofia Coppola’s limpid, obstinately personal look at a life adrift in L. A. has left detractors scratching their head. What is “Somewhere” about?

They’d kill for a story. “Somewhere” doesn’t really have one. A man who assumes that each day will be succeeded by another, identical day is brought up short by time spent with his daughter. “Bad boy” actor Johnny Marco (Stephen Dorff, dazed, indolent, perma-stubbled) is between acting gigs, living in the Chateau Marmont hotel. Room service seems to include twins with portable poles and boombox. In his room, an Ed Ruscha painting sits propped in a corner. “Somewhere,” as a title, has the forlorn, muzzy character of one of his word-studded California skies.

Johnny’s cocooned. A Hollywood Foreign Press Association press conference, as he’s peppered with questions not only inane but indecipherable, is deadpanned as an existential crisis, as does a makeup test as an old, old man that makes him look like the present-day John Carpenter. Cold beer is always at hand, any brand. And cigarettes. And the promise of the promise of sex.

But mostly, this ninety-minute movie is about time, the preciousness of time. A fall on a stairway busts the forearm of the languishing star. Meds slow him down, but he doesn’t realize it right away. How weary is Johnny? Worn enough to meet at a party one of many willing young women and then fall asleep face down between her open legs. When his wife leaves his skinny daughter Cleo (Elle Fanning, in a marvelous, vital performance) with him for a few weeks, his repetitions are interrupted.

Coppola has the confidence of her own finance. She shoots how she wants to shoot. The screenplay Focus Features provided for awards consideration is a mere forty-three pages; the opening shot, which runs four minutes or so, is described this way: “It’s overcast, as a black Ferrari speeds around an empty track in the foggy haze. It does lap after lap, getting nowhere. It slows down and stops. JOHNNY gets out and stands there.” It’s a Monte Hellman moment; it’s a Vincent Gallo moment (as in “The Brown Bunny”). The movie announces itself as minimalist with that shot. Then it’s almost half an hour before a word is spoken. Coppola’s framings are deliberate but often seem peculiar and found, even aleatory: this is not a handheld movie.

Coppola doesn’t explain. There’s a readily deciphered elevator cameo by a real-life hipster actor who reputedly had sex there with a starlet. So is the brief shot of a car cracked up at the Sunset Boulevard level of the hotel’s parking ramp evokes the site of photographer Helmut Newton’s death. Coppola doesn’t footnote this, but the movie offers a succession of sequences with perky-breasted, topless women, smoking women, women being barbered on balconies, that invoke Newton as a sybarite muse to the hotel. Meanwhile, an enormous Tom Ford plastered on the side of Sunset Tower looks down approvingly on the Boulevard. Swimming pools shimmer with memories of David Hockney. Dreamy days. Any time. Every time. Somewhere.

There are signposts that can be deciphered, and others that are surely meaningful to Coppola in ways we can’t know, but there’s an accruing sense of weight. Johnny watching his daughter ice skate goes on for minutes and minutes and it’s beautiful. The kid-swan is clumsy with potential, gawky in blue spangles. (It’s more serene than a similar passage in Harmony Korine’s “Julien Donkey-Boy.”)

The aural tousle of her pop choices is downplayed in favor of extremely measured sound design, slightly reedy at times, but always calibrated in terms of the rhythm of the many extended takes. There is a scene where 11-year-old Cleo prepares eggs Benedict in the hotel-room kitchen, all by herself. She’s the solitary child of separated parents, self-sufficient: the details of the scene’s sound swaddle her. It’s a strong contrast to the New Romantic dance party of “Marie Antoinette.”

There is a scene where we cannot hear what two characters are saying, akin to “Lost in Translation.” Cleo cannot hear her father’s words over the backwash of a large black helicopter. Small and large muddle: “Apocalypse Whenever.” Coppola’s first screen credit as a writer came in 1989, sharing credit with her father at the age of 18 on the “Life Without Zoe” segment of “New York Stories.” It’s an “Eloise at the Plaza”-type tale of a rich 12-year-old girl left alone in a hotel, who hopes to bring her parents back together. Life with Zoetrope: twenty-one years later, the Coppolas have produced another version of life leaking away in hotels.

So is “Somewhere” about unexamined privilege? What is the “story”? Or its “subject”? It offers satisfactions and contentment: It’s a succession of sensations, of being adrift in a city where the weather seldom changes, where the stars are always young, where children must make their own way. The sky is blue and clear.