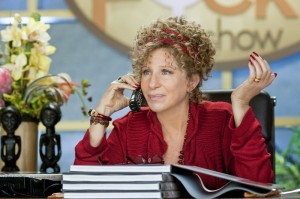 From courting in “Meet the Parents (2000) and marrying in “Meet the Fockers” (2004), to childrearing in “Little Fockers,” there are more lax yuks about retired CIA agent Jack Byrnes (Robert De Niro) humiliating son-in-law and male nurse Greg Focker (Ben Stiller), now the father of the title twins. The prior installment focused on Jack’s issues of distrust and domination. This one is about Greg’s standing as a wife-satisfier, breadwinner and childraiser. In the second film, Greg embarrassed himself at his engagement party by telling family secrets under the influence of truth serum. Now he mocks Jack at a urologist confab and it gets back to the in-laws via YouTube. Instead of Jack injecting Greg in a bathroom, this time Greg injects Jack in a bathroom; the sexy housekeeper who deflowered teenaged Greg is updated with a sexy pharm flack for “boner medicine” (Jessica Alba). Flamenco, not capoeira, is the hobby of Greg’s dad (Dustin Hoffman). At the dinner table, projectile vomit replaces arterial sprays. Snickering wordplay with Fockers’ name remains at the level of a sophomore locker room. “Manopause” replaces “manary” glands. And a cousin of that toddler whose first word was “asshole,” is old enough to ask the darndest thing: “Can a girl poop from her vagina?” Directing a screenplay by Larry Stuckey and John Hamburg, Paul Weitz (“American Dreamz,” “American Pie”) manages to kill most punchlines and pratfalls with lousy timing and framing. With Teri Polo, Owen Wilson, Blythe Danner, Barbra Streisand, Laura Dern, Harvey Keitel and Deepak Chopra as himself. 98m. (Bill Stamets)