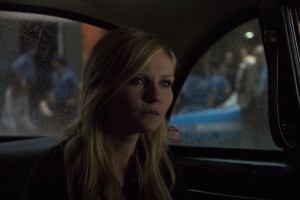 True crime fiction in the form of the missing person case at the center of “All Good Things” doesn’t entirely suit filmmaker Andrew Jarecki’s skills, substantial though they are. His previous film, the documentary “Capturing the Friedmans,” (2003) was sinister and unsparing, working from the facts of an eminently dysfunctional family. For his first fiction feature, working from the facts of multiple murder cases brought against Robert Durst, heir of an eminent New York real estate family, Jarecki comes up against the problem of a deeply unsympathetic main character and the need to create mystery and intrigue from a story where many facts remain unexplained. (Names and events are altered.) Still, a documentary treatment of the facts would deny us Ryan Gosling’s acidic, almost barbaric central performance. The look and feel of the film is accomplished, suggesting the grittier New York of the 1970s, with credit to cinematographer Michael Seresin (“Harry Potter and the Prisoner of Azkaban,” “Midnight Express”). As vulnerable as sleepy-eyed, doe-eyed Kirsten Dunst can be, playing a Long Island woman from a different social stratum, she seems mismatched beside Gosling, who embodies a man without a conscience. She seems a despairing wisp from a different telling of the story. For Gosling’s true coup of 2010, look forward to Derek Cianfrance’s “Blue Valentine,” opening in January. As the patriarch, Frank Langella is an icon of malice. With Kristen Wiig, Diane Venora, Philip Baker Hall, Trini Alvarado, John Cullum. 101m. (Ray Pride)

“All Good Things” Opens Friday at the Music Box.