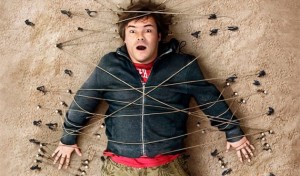 Screenwriters Joe Stillman and Nicholas Stoller contemporize “Gulliver’s Travels,” Jonathan Swift’s 1726 account of the fantastic travels of a ship’s surgeon to three islands and the land of the Yahoos. Nearly none of the political satire of England and Europe survives this abridgement. Swift’s attack on his time’s oratory turns into characters quoting rock lyrics. This “Gulliver’s Travels” bowdlerizes the bodily waste comedy in the original, but at least that Swiftian motif tracks with the casting of Jack Black. In no way stretching his branded persona, he plays Lemuel Gulliver, a ten-year employee in the mailroom of the New York Tribune with a five-year crush on travel editor Darcy Silverman (Amanda Peet). She assigns him to write about a tour to the Bermuda Triangle, where an inter-dimensional vortex transports him to the kingdom of Liliput. The locals are quite little and Lemuel is a big deal in court politics, a hero for putting out a fire with his piss. Lemuel coaches the commoner Horatio (Jason Segel) to do what he himself has yet to do, which is get up the nerve to do a “valiant” deed to get the out-of-his-league gal. “Gulliver’s Travels” is directed by Rob Letterman (“Monsters vs. Aliens”), who is totally outdone by the fourth “Ice Age” cartoon, featuring Scat and his epic acorn, that precedes this “3D family comedy.” With Emily Blunt, Chris O’Dowd, Billy Connolly, Catherine Tate. 87m. (Bill Stamets)