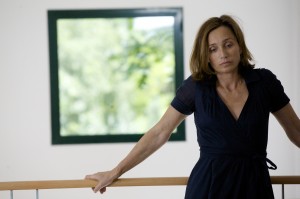 A turn to working largely in French film has given Kristin Scott Thomas the kind of leading roles that are as much inhabited as performed, including “Tell No One,” (2006) and especially Philippe Claudel’s “I’ve Loved You So Long” (2008), where every motion, every gesture was weighted with her character’s tragic history. Catherine Corsini’s “Leaving” (Partir, 2009) is less weighty and a little bit trashy, but Scott Thomas’ performance as a privileged but disaffected wife in South France, along with Yvan Attal as her belittling businessman husband and Sergi López as the Spanish contractor who comes between them is enjoyable. The conflicts are D. H. Lawrence in outline, but the result is only lightly likeable. The lighting by cinematographer Agnès Godard (“Home,” most of Claire Denis’ movies) is luminous, matching the magic and mystery of Scott Thomas’ face, even—especially—in repose. 90m. (Ray Pride)