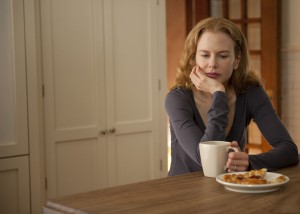 “Rabbit Hole” is a lowercase drama, adapted by David Lindsay-Abaire from his Pulitzer Prize-winning play, showcasing the acting range of Nicole Kidman and Aaron Eckhart as Becca and Howie, parents hoping to overcome the sudden death of their young child. As Becca’s mother, Dianne Wiest plays a woman weathered by her own grief with telling understatement. Modesty is the order of the day, with their Queens, New York house dressed and lit in gentle taupe and sand colors and Ann Roth’s costumes precise yet sedate. The surfaces and veneer of gentility smothers. While the home has been stripped of pictures of the small boy, other elements obtain thematically, such as photographs of the empty shells of abandoned industrial buildings. (Even a simple walk-by on a Manhattan street offers the awning of a funeral home in the background.) It’s a chamber drama told from a middle-distance perspective, a domestic setting that all the terrible emotions of the story require. Kidman and Eckhart both excel at Lindsay-Abaire’s meticulous colloquial dialogue, and Becca’s deep sadness and open wounds are conveyed in ticklish, fleet fashion. Some reviewers have suggested that John Cameron Mitchell’s earlier pictures, “Hedwig and the Angry Inch” and “Shortbus” were more personal. In interviews, Mitchell has mentioned his family’s loss of a sibling in his youth, and while that autobiographical element shouldn’t shape a viewer’s perception of the movie, the currents of pain on-screen are felt, if not fully cathartic. Chicagoan Gigi Pritzker is among the producers. 92m. (Ray Pride)