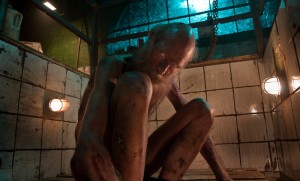 For Christians seeing “Santa” as an anagram for “Satan,” this seasonal eccentricity from Finland may confirm fears about the upcoming holiday. Secretive foreign “geologists” excavate a legendary kidnapper and killer of “naughty” boys and girls: buried for centuries under a man-made mountain of ice and dirt, this is the pre-Christian (and pre-“Coca-Cola,” as the locals note) Santa (Peeter Jakobi). Hardly toy-makers in red suits, he and his elf minions are vicious seventyish, naked, nonverbal, white-bearded creatures who slaughter 433 reindeer in a single night. Intrepid hunters, now facing starvation, put the Santas in their place—first in an electrified pen and then in crates stencilled “live cargo”—and ship them to buyers in Zanzibar and other faraway places. Wrapping up as awkward satire on human trafficking, this tart horror exercise is also a lad’s adventure tale. In “Rare Exports: A Christmas Tale,” writer-director Jalmari Helander expands his two shorts from 2003 and 2005 about Finnish hunters who have tracked, tranquilized and trained feral Father Christmases since 1739, although this feature-length version alters the timeline so the custom starts in the present. Half-baked this screen fruitcake may be, Helander stirs a mélange of touches and tones for a revisionist treat. With Onni Tommila, Jorma Tommila, Ilmari Jarvenpaa, Per Christian Ellefsen, Tommi Korpela. 77m. (Bill Stamets)