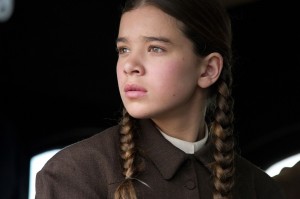 A simple Western festooned with wicked comic vernacular, Joel and Ethan Coen’s “True Grit” honors its source, the best-selling novel by the great novelist Charles Portis. Directorial sarcasm seems at a rare minimum for the brothers, as they trust the actors to capture the rich lingo and fierce illusions of its characters. Jeff Bridges’ U.S. Marshal Rooster Cogburn is dubbed the one with “true grit” by 14-year-old Mattie Ross (Hailee Steinfeld). Steinfeld is a torrential force of nature as the one with the truest grit, wrangling majestic swathes of dialogue but also simple statements like “There is no clock on my business.” Steinfeld’s precocity brings high flush to her cheeks, making her more imposing than vulnerable in the face of dullard mankind. Mattie’s range of polymathic knowledge startles and stumps the denizens of Fort Smith, Arkansas, “fugitives and malefactors” alike, who would stand in the way of avenging the shooting death of her father. But she’s got cash, which leads to wary, provisional collaboration with both the trigger-happy-if-one-eyed Cogburn and run-at-the-mouth Texas Ranger LaBoeuf (Matt Damon, relishing his role as a dapper and slightly simple dandy). “I don’t believe in fairytales,” Rooster says, shooing Mattie, “or sermons or stories about money, baby sister, but thanks for the cigarette.” (“Goddam ducks!” is my favorite of Rooster’s gravel-muttered pronouncements, sounding like a Tom Waits who does not strive to sing; “I do not know this man” may be the most loving instance of his skill with deadpan delivery.) As to be expected in a Coen production, the production values are exemplary, including work by costumer designer Mary Zophres in her tenth consecutive collaboration with the brothers, and by production designer Jess Gonchor, but especially Roger Deakins’ cinematography. By night and by day, Deakins finds poetry in the most spare of settings. A climactic scene where stark stars in the sky are met by fluttering fat snowflakes is quietly breathtaking. (Carter Burwell’s score, on the other hand, leans heavily on standard hymns.) The novel has a slightly different savor, and for those so inclined, Portis’ other four novels include two beautiful and sardonic comic gems, “Norwood” and “The Dog of the South.” With Josh Brolin and Barry Pepper as Lucky Ned Pepper. 110m. (Ray Pride)