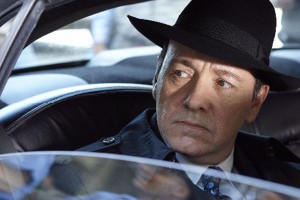 The last fiction feature by George Hickenlooper, who died in October at the age of 47, “Casino Jack” still suggests a career in progress, of promise rather than attainment. (He’ll likely be most remembered for “Hearts of Darkness,” the “Apocalypse Now” making-of feature.) Kevin Spacey stars as Jack Abramoff, the disgraced GOP lobbyist who recently completed a prison sentence, a movie-mad con man whose predations against the political system were enumerated earlier this year in Alex Gibney’s superior “Casino Jack and the United States of Money.” The opening scene, a go-get-’em speech by Abramoff between spats of toothpaste in a public-toilet mirror is typical of the film’s overkill, a royal shooting of the faux-Mamet wad that Spacey manages not to give a convincing lilt. (The screenplay is by Norman Snider.) “Mediocrity is the elephant in the room” is part of the peroration: bland and without self-knowledge, although Abramoff’s presented as a smart cookie gone wrong. “We’re under horrific assault from the worst forces in our culture!” he brays into the phone. An ill-judged score veers tonally to the comic in scenes that aren’t funny, although Jon Lovitz makes a blissfully bored sybarite and the late Maury Chaykin plays world-weariness to a fault. Whether from budget or choice, other small details chafe, such as the relentless expository dialogue and the actor playing anti-tax advocate Grover Norquist having a Canadian accent. (The actor playing the fallen Tom DeLay looks more like Jeb Bush.) “Don’t fucking mess with my chi, dude, we are super-fucked here” is typical of the profane rants of Abramoff’s partner, Michael Scanlon (Barry Pepper). Facts and data run amok, as if the movie thought it were a fat nonfiction book. Audiences, whether versed in the particulars of the on-screen scandals or not, may well say the same. Adam Swica’s cinematography is handsome, however, and editor William Steinkamp also edited “Tootsie,” “Out of Africa” and “The Scent of A Woman.” With Kelly Preston, Graham Greene. 108m. (Ray Pride)