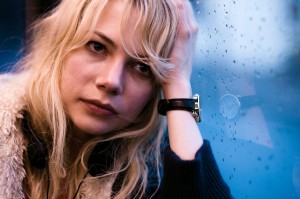 “Blue Valentine” is a hotdog that thinks it’s a world-beating feast.

Derek Cianfrance’s second feature is a horror movie about American romance, steeped in blue-collar imagery and American flags, performed by two of the most gifted American actors in their thirties. It’s drenching, wrenching and false in almost every note not involving Michelle Williams and Ryan Gosling. Cianfrance shatters time: the goofy meet-cute of Cindy and Dean near a college campus leads six years later to the hate-brute of the death throes of their relationship in downcast rural Pennsylvania. With the two periods shot a month apart, the “past” is in a subdued Super 16mm and the “present” in a brighter, heavy-on-the-red high-definition video, but discontinuous slips between now and then create a warp and weave that suggests memory’s timelessness but also of destructive habits and deadly repetitions.

The script tells us a lot about Cindy, not so much about Dean. She’s determined to become a doctor, surrounded always by terrible men, from her angry father, to a doctor who makes clumsy passes, to the pretty-faced jock college boyfriend who comes inside her without warning her. Dean’s uneducated, working class, pushy with the affected charm, lacking drive. The script would be pretty much “Scenes From a Workshop” if it weren’t for the two actors. From the very first scene, where the volume slowly rises, a young girl’s voice crying out atop a sound bed of crickets, Cianfrance is determined to be over-determined. The iconography of landscape and location parallels the working-class worlds assembled by William Eggleston and Stephen Shore. Gifted cinematographer Andrij Parekh (“Half Nelson”) could mount a splendid fine arts photography exhibition from any random fistful of frames.

Cigarette tucked in his mouth with aviator glasses, Gosling’s a ringer for the middle-aged Hunter S. Thompson who, in his time, was madly prolific, while Dean is content to merely drink beer on the clock as a house painter from 8am on and then be father… and husband… and child. While the 6-year-old girl is a key element keeping them together, she’s also a playmate for him. Williams is stellar, from the first shots watching them in the “present,” capturing the sudden translucent character of disappointment. Even tired to the bone, Cindy’s pretty like a pixie, but doesn’t withhold emotion. Notably, all three characters are dressed in variations of red, white and blue.

The script makes Cindy late to a school assembly where ranks of girls sing “Yankee Doodle Dandy”; she breaks down as the schoolchildren pipe up with the words, “Let freedom ring.” Throughout, thematic dice are loaded and shot, with as many as a dozen limp American flags daubed into the corner of the frame, never in motion, drooping, flaccid fabric of red, white and blue. The soundtrack, which includes bits of eight songs from Grizzly Bear, bristles throughout, all very, very much in Mickey Mouse lockstep, insisting on an extra slather of gloom, doom and minor chord melancholy. (Philip Seymour Hoffman showed much more taste and discretion in using similar songs to offer his character an inner life in “Jack Goes Boating.”)

Dean suggests rekindling their romance with a night at a tacky sex motel: strong liquor and “The Future Room.” “We’re going to the Future,” he actually says. What the movie says? You will make the wrong choices. You will make them again and again. You will suffer. Life will be suffocating; the more well off will be condescending. Much as Melissa Leo as the mother to the phalanx of harridan harpy sisters in “The Fighter,” Williams and Gosling are too good at gnawing on these ruined souls. An enormous rainbow rises above their first meeting, a huge dome embracing the hope of their like teasing into love. (The characters aren’t allowed to notice it.)

Instead, Cindy’s impressed by Dean’s ability to offer compliments and insults “in equal measure,” belittling her while telling her she’s beautiful, which leads her to tell a child-molester joke. Williams manages something exquisite: in a close-up of Cindy’s face, she’s amused by Dean’s clumsy complicated attentions and the character has already started to think in her head how it might be received. The joke? Painfully “meaningful,” let’s leave it at that. Deeper and deeper into the woods we go with these two. And of course, there’s an American flag in the next scene. Paraphrasing Wilco, I started to think of the movie as “Ashes of American Fucks.”

Cindy and Dean walk along a sidewalk at night. He wields the tiny ukulele he’s been carrying everywhere and sings, “You always hurt the ones you love” in an Adam Sandler-style affectation. She’s wearing black engineer boots, a short skirt, a red shirt, and she dances in the entryway to a shop. She bursts with glee in charming, clumsy motions. (The shop door behind her has a wreath-like red heart hanging, which of course her head is framed directly against.) Cindy’s joy is limitless.

“Blue Valentine” opens Friday at Landmark Century. The ukulele-and-dancing scene described is central to the Australian trailer below.