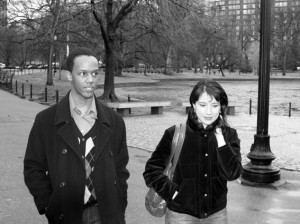 Can a film be so retro it’s new; so anachronistic it’s a thing of now? Harvard grad Damien Chazelle’s low-budget 16mm black-and-white hand-held, in-your-face jazz musical romance “Guy and Madeline On A Park Bench” pretty much finds (or loses) its audience under its opening credits. A light yet still brassy jazz number accompanies images of a couple in contemporary Boston: a jazz trumpeter and a shy girl. Dance will ensue, as well as breaking out into song. Much of the camerawork and editing feels more like a 1970s student film than a relic of the 1960s or a product of the 2000s, but Chazelle’s willingness to pastiche everyone from Demy to Cassavetes to Godard marks the film as of recent moment. Either its whimsy failed me or I failed it, dunno. When I tell friends about loving musicals, the way they sometimes recoil may be similar to my reaction here. But other reviewers are charmed, including the LA Weekly reviewer who found it “thrillingly innovative,” and the New York Times’ Manohla Dargis, who named it one of the thirty best of 2010. And the Village Voice’s J. Hoberman says it’s “a beautifully shot, rhythmically complex, wildly artistic, willfully eccentric quest for authenticity.” I could well be wrong, or I may just lack the ear for the music on screen. The Bratislava Symphony Orchestra performs Justin Hurwitz’s score. “Presented” by Stanley Tucci. 82m. HDCam video. (Ray Pride)

“Guy And Madeline On A Park Bench” plays Friday-Saturday, Monday-Tuesday and Thursday at Siskel.