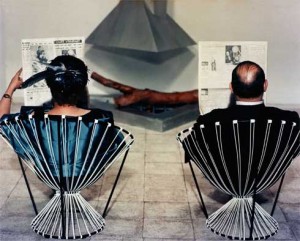 “Mon Oncle” (France, 1958) is second only to “Playtime” among my favorite of Jacques Tati’s methodical comedies. Yet the onslaught of information, the sheer weight of the topography of the imagined and designed world of “Playtime” makes it more of a huge statement, a costly, consuming gesamtkunstwerk. Whereas his sweet-hearted satire of modern design, extended families and dogs, “Mon Oncle,” which won the Oscar for best foreign language film, may be more approachable, filled with gentle yet precise whimsy. His slapstick is as close to dance as it is to common physical comedy. This version, “My Uncle,” is a new 35mm restoration from the original negative of an unseen English-language version recently unearthed in Tati’s archives. (The two versions contain different scenes and emphases.) As in “Playtime”‘s variant, the language is often confined to atmosphere and murmurs: the key language is the lanky Mr. Hulot’s motions through a designed world, 1950s France, that is still in need of dachshunds running free. It’s generous genius in any language. (“The Illusionist,” Sylvain Chomet’s animated adaptation of an unproduced Tati script, opens later this month.) 117m. (Ray Pride)

“My Uncle” opens Friday at the Music Box.