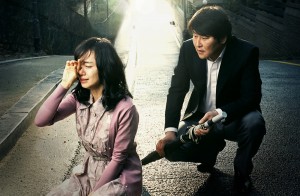 Near-novelistic in its heft and aspiration, Chang-dong Lee’s “Secret Sunshine” (Milyang) is an epic tragedy set in small-town South Korea and blessed with an emphatic performance by Do-yeon Jeon as a grieving mother. A 2007 production, “Secret Sunshine” is getting a belated release in anticipation of Lee’s highly lauded “Poetry” opening later this year.) His characters suffer deeply, but Lee doesn’t punish them, precisely, rather, he observes with the compassion of a neighbor, a friend, a poet. Jeon won Best Actress at Cannes in 2007 for her portrayal of a woman who turns to Christianity after loss and finds it wanting as well. A wrenching descent into madness or the resistance of a sturdy soul against whatever may come? Jeon is fierce and compelling. Lee’s earlier films include “Peppermint Candy” (2000) and “Oasis,” (2002) which demonstrate a willingness to display wounds and suffering with similar clarity. 142m. HDCam video. (Ray Pride)