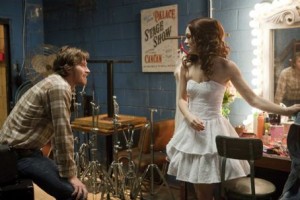 Writer-director Shana Feste (“The Greatest”) follows a foursome of country western pros on the road in Texas: star Kelly Canter (Gwyneth Paltrow); her husband and manager James Canter, played by country star Tim McGraw (who does not sing here); young singer-songwriter Beau Hutton (Garrett Hedlund, “TRON: Legacy”); and young singer-songwriter Chiles Stanton (Leighton Meester, “Gossip Girl”). Kelly gets out of rehab a month too soon. She takes along a box housing a baby quail she found that had fallen out of its nest. She’s been messing around with Beau, an attendant at the facility who performs at a local bar after work. James brings him along to monitor Kelly on her comeback tour. Kelly’s opening act is supposed to be Chiles, a former Miss Kilgore with stage fright. Kelly suspects she is messing around with James. “Love and fame can’t live in the same place,” as Kelly writes in a letter to Beau. Around this trite theme, Feste scripts far better characters and shapes moving performances. The interplay within the foursome is more original than the traditional backstage melodrama and the typical country lyric. Kelly’s personal and professional crisis is hooked, in a few lines of backstory, to her tripping on a microphone cord at a Dallas concert, falling off the stage and losing her baby. Five months pregnant, she had a blood alcohol level of 1.9. Now her relapse-prone “Encore” tour will end in Dallas. Feste does not shed much light on Kelly’s hurt. Nor is there a lot of insider stuff about the biz. Beau, though, teases Chiles for looking “like a country Barbie” and coming up with song titles that sound like “rides at Disneyland.” “Just because they put them on the radio doesn’t mean they’re worth a damn,” cautions her purist pal who’d rather sing about “my grandpa’s old Gibson and a girlfriend of no importance” to “hardworking people who like good music while they drink their beer.” “Country Strong” is an equivocal critique of pop fare for people who like good movies while they eat their popcorn. With Marshall Chapman, Jeremy Childs, Lari White, Jackie Welch. 111m. (Bill Stamets)