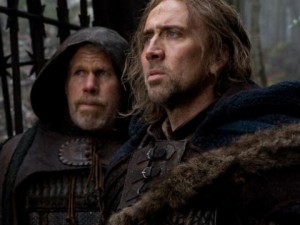 Back in 1235 A.D. three witches are hung off a stone bridge and then lowered into a river. In the dead of night, one came back. A century or so later, “The Girl” (Claire Foy) is called a witch, blamed for the plague and extradited to an abbey for trial. “Season of the Witch” is the plodding tale of that six-day trek that ends with a supernatural CGI smackdown. The key smackdowners are the unbeliever-slayers Behmen (Nicolas Cage) and Felson (Ron Perlman). These lusty, smelly Crusaders killed for Christ throughout the 1330s and after. Until that day in Smyrna in 1344 (probably October 28, according to the Catholic Encyclopedia) when Behmen felt bad about impaling an unarmed woman, so he deserted the church. Captured by priests, the duo is forced to escort The Girl in a horse-drawn cage for 400 leagues across a rotting rope bridge and through the Wormwood Forest where demonic wolves lurk. At the abbey there’s a book of spells. The souls of the monks are hijacked by something terribly evil. “We’re going to need more holy water,” reports a cleric. The winged woman here beats the feathers off the one in “Black Swan.” Cage is a seasoned evil-killer, if you’ve seen him in “The Sorcerer’s Apprentice” (2010) and “Ghost Rider” (2007). But the Middle Ages delimits the motor-vehicle mayhem that director Dominic Sena displayed in his “Swordfish” (2001) and “Gone in Sixty Seconds” (2000). Writer Bragi F. Schut continues the end-of-the-world stakes seen in his 2005 CBS series “Threshold.” Shot in Austria, Croatia and Louisiana, “Season of the Witch” is an unoriginal apologia for Catholic action-adventure. Reading scripture aloud in Latin may not smite heathens or halt the plague, but it always kicks satanic ass at the multiplex. With Stephen Campbell Moore, Stephen Graham, Ulrich Thomsen, Robert Sheehan, Christopher Lee. 95m. (Bill Stamets)