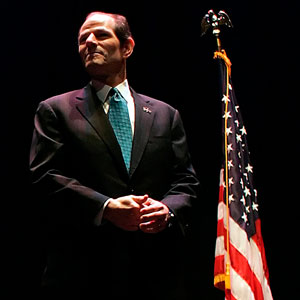 It’s inevitable and altogether proper that Academy Award-winning documentarian Alex Gibney’s latest, “Client 9: The Rise And Fall of Eliot Spitzer” will be paired by reviewers and in moviegoers’ minds with Charles Ferguson’s “Inside Job,” another well-researched, intelligent, hyper-aware, maddening glimpse into elements of the world financial meltdown of 2008 onward. Gibney’s excellent portrait of the self-destruction of New York’s former Attorney General and governor may be the better film by implication: the forces that took advantage of Spitzer’s vulnerabilities are readily aligned with those which gamed the banking system for power and gain. Gibney’s work (including “Enron: The Smartest Guys in the Room”) is always immaculately fashioned and paced, and “Client 9” is no exception. A story about a man and his enemies, within and without, about all kinds of bad faith, a tabloid tale of sex and infidelity, in the end, “Client 9” is about power, even to the extent that Spitzer’s willingness to submit to multiple interviews and face precise questioning is also about himself reentering the public sphere, of regaining influence in our political system. Hubris is everlasting. (And if this week’s rumors hold, Spitzer’s already outlasted his co-host on his CNN news hour.) 116m. (Ray Pride)

“Client 9: The Rise And Fall of Eliot Spitzer” opens Friday at Siskel.