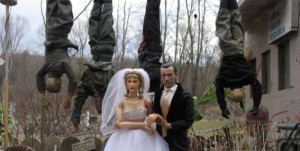 Jeff Malmberg’s “Marwencol” is a marvel. After being beaten to a pulp outside a bar in Kingston, New York, a hundred miles or so north of New York City, and then emerging from a coma, thirtyish Mark Hogancamp’s personal therapy to reclaim his memory is to create a World War II Belgian village in his backyard at one-sixth scale, creating the citizenry from Barbie dolls and action figures. In lieu of his memories, Hogancamp has Marwencol—a fantastic creation both therapeutic and fetishistic, obsession and art. At a Henry Darger-like level of fantastication, Hogancamp imagines the doings of this imaginary town, then photographs tableaux. (Part of the narrative is an oncoming New York gallery opening for Hogancamp and his population.) Malmberg is an artist, too, a sensitive observer of a sensitive subject. “Marwencol” is both strange and strangely touching. (Some of Hogancamp’s photographs are here.) 83m. (Ray Pride)