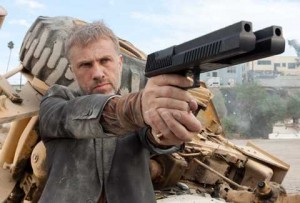 Director Michel Gondry hardly displays the visual play that levitated his “Eternal Sunshine of the Spotless Mind” and “The Science of Sleep.” Here he is tasked with a jokey screenplay by Seth Rogen and Evan Goldberg, who earlier co-wrote “Superbad” and “Pineapple Express.” Rich brat Britt Reid (Rogen) is the dissolute son of the late publisher of the The Daily Sentinel in Los Angeles. He plays vigilante on a lark with Kato (Jay Chou), his barista, mechanic and chauffeur. There’s a drug kingpin and a dirty D.A. Lots of cars, guns, fireballs and shattered glass. Cameron Diaz has a cameo role as a temp secretary who knows her crime news. Based on “The Green Hornet” radio series created by George W. Trendle in the thirties, this is thin action comedy that makes little of the superhero and sidekick dynamic. Sad to report, the best line may be Britt’s anticipation of Kato’s unwritten autobiography: “When they adapted it to a movie, I’d watch the shit out of that movie.” In this 3D conversion, there’s this bit of visual business to look for: the very same bad guy who wields a double-barrelled handgun gets two halves of a broken chair leg poked into his eye sockets. That’s the best industry insider joke about 3D to date. With Christoph Waltz, Edward James Olmos, David Harbour, Tom Wilkinson. 87m. (Bill Stamets)