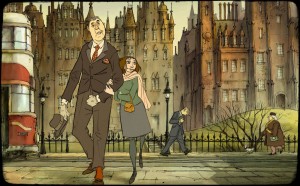 Sylvain Chomet’s debut animated feature, “The Triplets of Belleville” (2003) is one of the great eyefuls of recent animation, an inundation into an eccentric, overstuffed and very specific world. His first feature since then, “The Illusionist,” based on an unproduced screenplay by Jacques Tati, is a bit more subtle and dry as the story follows a tall Hulot figure, “Tatischeff,” across mid-century Europe as the days of music hall die off. Tatischeff winds up in a dusty Glasgow (where Chomet himself works as well), which offers such modest asides as kilted Scots cutting a rug to a pub’s jukebox, until he meets a young girl, Alice, who believes in his potential as a magician. Near silent and nostalgic in a dusty and pleasant fashion, Chomet is a master of finding expressiveness in faces both human and rabbit, man and girl, and they’re well worth gazing into. Chomet’s framing echoes both the proscenium of music hall and the middle distance framing of Tati’s own great films. A combination of hand-drawn and computer work set “The Illusionist” apart from the 3-D cruise ship-luxury-liner-scaled productions of DreamWorks, but its genuine satisfactions are on a much gentler scale, as in Tati’s own impeccably scaled and timed comedy. Is this aficionado of hand-drawn animation making a portrait of his own place in the world of film in that of an “illusionist” at the death of his trade? Yes, and more. Chomet scored the film as well as adapting and directing. 82m. (Ray Pride)

“The Illusionist” opens Friday at the Music Box.