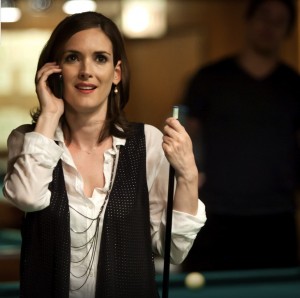 I was ready to feel rewarded if Ron Howard’s Chicago-set and -shot “The Dilemma” had only a succession of imaginatively dressed locations and gorgeously shot cutaways to the skyline of Chicago going for it.

Fade in: cinematographer Salvatore Totino’s swooping wide-screen helicopter shot approaching the city at luminous, burnished dusk, camera moving toward Marina City and an opening scene setting the movie’s premise at the Smith & Wollensky steakhouse. Which is, essentially, what’s the one thing you’d always keep from your best friend? It’s after dinner, there’s wine all around, Vince Vaughn’s character is leading the banter. Ronny Valentine (Vaughn) and Nick Brannen (Kevin James) have been friends since college and now work as consultants to car manufacturers. Nick’s a genius at designing engines; Ronny’s the skyscraper of schmooze. With them is Nick’s wife Geneva (Winona Ryder) and Ronny’s girlfriend Beth (Jennifer Connelly), who works as a chef at the Sepia restaurant. The script by Chicago-born Allan Loeb (“21,” “Wall Street: Money Never Sleeps”) sneaks in bits of conflict to come in every scene, and each character’s modest flaws are further compounded by their behavior.

One of the more gratifying surprises is that the movie is decidedly not a comedy, although there are jokes and Vaughn’s character talks himself into, seldom out of, some rotten fixes. While superficially “The Dilemma” seems to fit into the “bromance” genre, that’s only in a few celebratory scenes. Some of what happens takes place off-screen, and the most important parts take place when characters are alone, especially Ronny. While the script has a clock, or deadline in place—a modification for Chrysler electric cars that will simulate the noise of internal-combustion engines is due in days or the pair will lose a contract—the heart of the movie more resembles a remake of a terse, obscure French film, one that could carry the title “Tell No One.” (A less charitable viewer might delve for meaning in their project, imposing aural clouds of VROOM on an efficiently ticking machine, which could pass as a chilly metaphor for raging at middle age or for making movies that blow small things up to cataclysmic proportion.)

Also ticking: Nick and Geneva urge Ronny to propose to Beth (who also happens to be the one near-angelic soul in the story), and in making preparations for the most romantic possible proposal, Ronny witnesses something, an apparent betrayal of Nick by Geneva. Keep his mouth shut? Tell his best friend? Which is the larger betrayal between the two men? Ronny turns stalker, pursuing the “truth”—one of his favorite words—and turning one fuckup into a succession of them. Without elaborating on all the complications, he manages to create his own trail of misimpressions that lead his friends to conclude that his damage may even be worse than anyone else’s. The European flavor is deepened by the fact that each character is flawed, and has withheld key bits of information in their relationships, and the script uses that both for farce and for drama. Even Beth, presented as angel to the more devilish Geneva—Ryder has an emotional scene confronting Vaughn late at night in a diner on Lawrence that matches the intensity of Natalie Portman in “Black Swan”—does wrong by not asking Ronny early enough just what’s making this big man so small.

The idea of couplehood—Howard’s already dealt with the fuss and fury and puke and piss of “Parenthood”—gets a good working out. There are speeches, including a darkly unpleasant one by Ronny at the fortieth wedding anniversary of Beth’s parents, but the “lessons” of the script are largely earned. Yes, it does embrace the “I love you, man” movie, it’s a “Can’t we all get along?” movie, but despite some uncomfortable lurches between its scenes of comedy and drama, it’s grown-up stuff.

Then there’s the wealth of emblematic elements, from Vaughn’s gut to Ryder’s laugh, from Connelly’s eyebrows to the bold neon of the Green Mill. Mix in Cubs hats, Cubs jerseys, the Blackhawks and a climax that just has to use that infernal Hawks theme song. Plus, the most enjoyably strange line in a movie in this young year, when Ronny is on his cell phone and witnesses something astonishing to him: “I’m doing all kinds of things with all the real people.” Odd in itself, delivered deliriously by Vaughn, it sums up the movie itself.