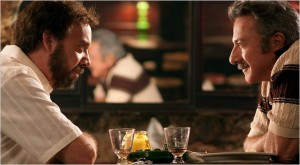 Mordechai Richler’s last novel, “Barney’s Version,” takes bits and bobs from the much-admired Canadian writer’s own life and refracts them through the perspective of an unreliable narrator who doesn’t realize his faculties are failing from Alzheimer’s. While Michael Konyves’ sprawling adaptation of Richler’s love letter to Montecristos, Scotch and adultery skirts that conceit, the movie, intriguingly, leaps forward and back in ways that suggest hack television producer Barney Panofsky has always possessed a nimble but scattered mind. As played by Paul Giamatti (winner of a best actor Golden Globe on Sunday for the role) in a succession of beards and feral hairpieces across three decades and two continents, Barney is a skirt-chaser of the broadest stripe, meeting his third wife at his second wedding, then pursuing her for months afterward. (His many, many transgressions only start at that level.) Giamatti glories in playing the grand bad man. Producer Robert Lantos, who was lampooned in the novel and retains the jokes at his expense, spent decades getting the film produced, and its mix of cultural and personal detail impresses even when narrative momentum stalls. One neat choice: Barney’s fictional Montreal watering hole is replaced by Grumpy’s, Richler’s real-life down-a-step local. Barney may very well be imbibing at the same spot of the bar as the late novelist. (A sweet tribute to creatures of habit.) A perfunctory murder mystery pops up once in a while, as do the Montreal Canadiens. But mostly it’s wry and Scotch: “Life’s real,” Barney’s third wife (a sane and steady Rosamund Pike) observes. “It’s made up of little things: minutes, hours, naps, emails.” Dustin Hoffman is splendid as Barney’s father, an equally vulgar creature with a career as a policeman known for brutality behind him, and as Barney’s unnamed second wife, a shrill chatterbox who you wouldn’t wish on your worst enemy, Minnie Driver has maniacal fun. With Saul Rubinek in a brief, brutal scene as a grieving father, Rachelle Lefevre, Bruce Greenwood, Scott Speedman, Mark Addy. Bit parts are peopled by Canadian luminaries, including David Cronenberg and Atom Egoyan as hack TV directors and Denys Arcand as a headwaiter. 132m. (Ray Pride)