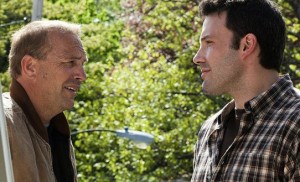 Men of unexamined comforts are stripped of their self-worth when their jobs vanish in veteran television producer John Wells’ feature film directorial debut, “The Company Men.” (Wells, whose television credits include “The West Wing” and “ER,” has also been an executive producer of films like “Savage Grace,” “I’m Not There” and “Far From Heaven.”) It’s down in the dumps instead of “Up in the Air.” “The Company Men” feels well intended, but it’s slick and comforting when its story of middle-aged men whose jobs are downsized at a Boston shipbuilding concern might be better served by raggedness and fury. (Ben Affleck and Tommy Lee Jones hit the right notes, and the well of sorrow displayed by Chris Cooper is devastating and seems hardly to have been tapped.) It’s an immensely important subject, the destruction of rewarding jobs in an era of ruthless economic behaviors, but not one best served by a television-scaled movie on the big screen. Wells is blowing bubbles about upper-middle-class perquisites instead of reflecting any resonant sense, small or large, of money’s bubble bursting. Roger Deakins shot “The Company Men,” but the eye behind “True Grit” seems to have been downsized as well. With Kevin Costner, Rosemarie DeWitt, Craig T. Nelson, Maria Bello. 113m. (Ray Pride)