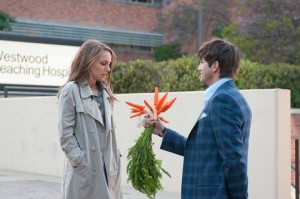 Ivan Reitman (“Ghostbusters,” “Kindergarten Cop”) directs a snappy script by Elizabeth Meriwether about Emma (Natalie Portman) and Adam (Ashton Kutcher) making a mutual service deal to be “sex friends.” No love allowed. There’s a similar set-up in this summer’s “Friends with Benefits” starring Mila Kunis and Justin Timberlake, and in “Friends (With Benefits)” from 2009. For  “No Strings Attached,” the backstory of the couple-to-be is charted in encounters from fifteen years, five years and one year ago. Emma is a sparkplug with a self-diagnosed “emotional peanut allergy” to normal romance. Her eighty-hour-a-week medical residency only allows for crazy-hot, commitment-free recreational coitus with Adam, an assistant on a high-school musical TV show. This aspiring writer lacks her allergy to intimacy with clothes on. Still, he dutifully IDs Emma on his cell as “Do Not Call Her.” Holding hands is the most intimate act in this R-rated romantic comedy that exposes little. In the first act, Adam’s butt gets a close-up and applause from Emma’s roommates as the naked hunk makes his way to her bedroom where she mentions an off-camera condom. In the third act, Portman’s rueful line reading of “Oh, fuck” is a note-to-self acknowledging she cut a string that was not supposed to be there. “No Strings Attached” is tagged with the usual fixtures of the genre. Emma and Adam are each embarrassed by a sexually active single parent. Other standbys include horny supporting pals, a porn-viewer distracted by actual love-makers, a late-blooming gay, and a wedding ending with a fast-forward to childbirth in the credit roll. A nouveau throwaway is a bit about 3D glasses. Meriwether’s winning script has Adam teasing Emma, a petite MIT grad: “You fight like a hamster” and “You eat like a baby dinosaur.” In another scene she cleverly links “pumpkin” to “puma.” And a menstruating character shares: “It’s like a crime scene in my pants.” With Kevin Kline, Greta Gerwig, Lake Bell, Olivia Thirlby, Mindy Kaling, Jake M. Johnson, Ludacris. 110m. (Bill Stamets)