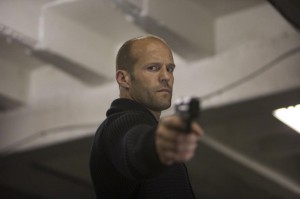 “You’re a goddamn machine,” is warm praise for a “mechanic,” the term-of-art for pro killers like Arthur Bishop (Jason Statham, “The Expendables,” three “Transporters” and the upcoming “The Killer Elite”). This is a lively and deadly remake of the 1972 film of the same name scripted by Lewis John Carlino (“Seconds”). At first titled “Killer of Killers,” that Charles Bronson vehicle had the exasperated host of a psychedelic house party yelling at a long-distance operator: “No, I didn’t call Afghanistan!” The updated screenplay by Richard Wenk (“16 Blocks”) adds more dimension to this story of a killer commissioned to kill one of his own. Assassin-on-assassin twists are go-to plots for ironic payback. Statham plays his usual existential hardbody. This time he spends time between hits in the bayou, digging old vinyl of Franz Schubert piano pieces. Guilt about terminating his mentor Harry (Donald Sutherland) prompts Arthur to mentor Harry’s screwed-up son Steve (Ben Foster, “The Messenger”). After the funeral, this black sheep asks his father’s favorite: “What kind of a person shoots someone in a wheelchair, anyway?” He finds out. All this moral ambiguity goo almost mucks up the action, as do mouthfuls of dialogue like: “I’m going to put a price on your head that’s so big, when you look in the mirror your reflection is going to want to shoot you in the face.” Simon West (“Lara Croft: Tomb Raider,” “Con Air”) directs the slick fiery chaos. With Tony Goldwyn, Jeff Chase, Mini Anden, James Logan, Eddie J. Fernandez. 92m. (Bill Stamets)